Ingrid (イングリッド, Inguriddo?), also known as the Eternal Goddess, is a video game character who first appeared in the fighting game Capcom Fighting Evolution, before joining the Street Fighter series starting with Street Fighter Alpha 3 MAX. She was originally designed by Hidetoshi "Neo_G" Ishizawa and Yoshinori Ono[1] for the canceled fighting game Capcom Fighting All-Stars as one of four original characters.

Ingrid has long, silver hair with bangs and two, large gold pins, one on each side of her head. Her irises are red in color. Her outfit resembles that of a schoolgirl's, consisting of a light, purplish-blue, long-sleeved top with white accents, gold buttons, and a white bow below the collar; a matching, short, pleated skirt with a white petticoat; white gloves; brown tights; and black, high-heeled Mary Janes with a bow on each instep.

Based on her Street Fighter Alpha 3 MAX in-game profile and the Street Fighter V website, Ingrid is the shortest and lightest playable Street Fighter character to date, standing at only 5' (152 cm) and weighing 86 lbs (39 kg). The Street Fighter: World Warrior Encyclopedia, however, incorrectly states her height to be at around 5'10" (179 cm) and her weight at 108 lbs (49 kg).[2]

Ingrid is an extremely powerful being who detests the evil nature of the Satsui no Hado. Wise and intelligent despite her apparent physical age, she also has a playful side which includes the tickling of defeated opponents, yet also displays an unusual lust for power and often comes across as aloof. Furthermore she holds Ryu and Rose in high regard.

Little, if anything, is known about Ingrid; however, Street Fighter Alpha 3 MAX presents some possibilities about her true origins. Her source of power is apparently derived from Psycho Power, yet is not purely evil like that of M. Bison; though seemingly quite similar to Rose's Soul Power.

Ingrid also possesses psychic abilities similar to Rose's, addressing both Ryu and Rose by name, despite never revealing them to her and is capable of actually breaking Ryu's madness if he ever succumbs to the Satsui no Hado. Rose also cannot look into Ingrid's future as she did with other Street Fighters. In addition, Ingrid has the power of time travel, sending herself to the year 201X in her arcade ending, where she notices that Ryu "is up to something interesting".

Ingrid's Capcom Fighters Network character profile disregards her story from Street Fighter Alpha 3 MAX, amending her backstory to be more in line with how she was originally going to be portrayed in Capcom Fighting All-Stars. Here she is a Code Holder, who's power was spontaneously activated on her own, via something known as Natural Code. She is a woman of many mysteries who possesses a unique power and a heavy fate, fighting in a style that makes fun of her opponent, through the use of her mystical powers and small stature. She has a deep connection with a fellow Code Holder; Death,[4] what this relationship is was never revealed, however they both share the same silver colored hair[5] and while Ingrid has longevity, Death has a shorter life span.[6]

Notably, Ingrid is the only playable character in the main series who's character profile is not labelled under Street Fighter V, instead being labelled Capcom Fighting All-Stars.

When asked if Ingrid could return as DLC for Street Fighter V, Ono stated it would be possible however a lot of things have to be done before her return.[7]

Before cancellation, some plot details of Capcom Fighting All-Stars revealed that Ingrid was one of three Code Holders (the other two being D.D. and Rook) contacted by Mike Haggar, who are needed to defuse a bomb called Laughing Sun, hidden in Metro City by a character known as DEATH. She is also given the nickname "Eternal Ray", likely relating to a ray of sunshine, given her attack theme.

After the cancellation of Capcom Fighting All-Stars, Ingrid, unlike the other three original characters, was remade as a 2D sprite for Capcom Fighting Evolution. Her gameplay is for the most part unchanged, outside her Sunshot traveling a much farther distance. Her arcade ending depicts her banishing Pyron, after which she decides to take off her gold crests, possibly giving up her power.

Ingrid is included as one of 10 S-grade Capcom character cards in SNK vs. Capcom Card Fighters DS, with her artwork being drawn by SNK artist Takkun.

Ingrid's model from Capcom Fighting All-Stars was used as a test model in Tatsunoko vs. Capcom and according to the Japanese pre-order booklet, she was also revealed to be playable at one point but was cut alongside Phoenix Wright from the Ace Attorney series, Komugi Narahara from Nurse Witch Komugi and Muteking from Muteking, The Dashing Warrior.[8]

While Ingrid doesn't make a physical appearance in the crossover game, she does appear in the prologue comic book by UDON, though only her silhouette is seen. According to the comic, Ingrid plays a role in the background story of Street Fighter X Tekken as the creator of Pandora; she sent it as a 'gift' to Earth to test humanity by using the temptation of the box's power.

Ingrid appears alongside other Capcom characters in the social games Minna to Capcom All Stars, Onimusha Soul and the rhythm RPG Otoranger, the latter of which also includes appearances from D.D. and Rook.

Ingrid appears as a solo unit in Project X Zone 2.[9] She debuts in "Chapter 10: The Code Holder". Much of her characteristics from Alpha 3 MAX carry over to her appearance here; in addition, she also has a habit of making snarky remarks throughout the game, including referencing Ryu/Bison shippers, mocking characters in skimpy outfits and teasing those who shout the names of their moves during battle. She also has two music themes in the game, Seek no Escape and Itoshisa to Setsunasa to Kokoro Tsuyosa to. Lastly, the ending of the final chapter portrays her sending everyone back to their respective times and dimensions after regaining her powers. 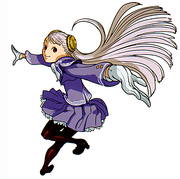 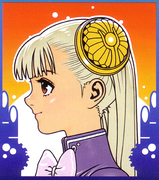