Hydron (Nool in Japan) is a fighting game character from the fantasy-themed arcade game Red Earth where he is one of the eight unplayable boss characters. He inhabits the Icelarn stage.

Hydron is a mischievous half-nautilus, half-kraken monster who was given power by Scion, but the only one standing in his way is Tessa.

Hydron appeared in Capcom Fighting Evolution as a playable character, along with Leo, Kenji and Hauzer. The Yashichi appears in his ending.

Profile text: The self-proclaimed "Divine Ocean Beast," an ocean creature living in the North Sea river basin. Hydron has no doubt that he can rule all the oceans in the world on his own. He carries an enormous trident as a weapon. 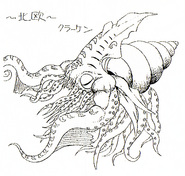 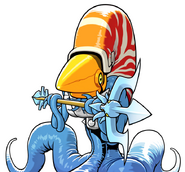