A Hunter is a customizable playable character in the Monster Hunter series of action role-playing games.

In the games, the player starts as a novice Hunter and is tasked through quests to help protect and support the villages either by hunting or trapping monsters, or by collecting resources that can be obtained in the field.

Atypically to most RPGs, the player's Hunter does not have any intrinsic attributes that change throughout the game, outside of a Hunting rank that determines what quests they can embark on. Instead, the player selects armor, weapons, and other equipment that grant certain bonuses or penalties to the Hunter. There are several different weapon types ranging from swords, hammers, hunting horns, lances, bows, and guns, each of which provide the player with different combat maneuvers in the field, and determine the Hunter's attack strength and potential elemental or status-inducing effects on the creatures they fight. Armor, made up from different pieces, grants defensive value, strengths and weaknesses to certain elemental attacks, and positive and negative points towards specific skills. These skills only activate after the player equips the Hunter with gear that pass a given threshold; for example, by having 10 total points in the Attack skill, the Hunter's attack is boosted, but may also accumulate -10 points in this skill which can weaken the Hunter's attack. Thus, the player can work to coordinate different sets of armor, weapon, and additional equipment including talismans and decorative gems that can be slotted into certain pieces of equipment to customize which skills their Hunter will have or to avoid inducing a negative skill effect.

Basic weapons, armor, and other equipment can be purchased from village shops using the in-game currency Zenny, but most equipment is constructed from collected resources, including the spoils from defeating monsters, represented in game as the various parts of a monster like hides, horns, and tails. The core loop of gameplay in Monster Hunter is to equip the Hunter with gear best suited for defeating a specific type of monster, questing to hunt and collect parts from that monster, and construct the equipment from those parts that is generally better in combat than their current gear, allowing the player to engage in more difficult monsters. The monster parts and other resources are given to the Hunter based on various percentages, with some parts appearing with high rarity.

In the crossover fighting game, a female Hunter, labeled as just "Monster Hunter", appears as a playable DLC character. Unlike most other playable characters in the Marvel vs. Capcom series, this Hunter is not based on a particular iteration of a character and is instead mostly original. This is because the playable Hunters in the Monster Hunter games act as silent protagonists and are defined by the player in appearance and gear, functioning the player's avatar in the world. In this game, however, this Hunter has fully-fledged voice acting; she is voiced by Melissa Hutchison. The female Hunter in this game is wearing the iconic Rathalos armor as her outfit, and wields a Golem Blade (Great Sword), Demolition Blades (Dual Blades), and Icicle Bow as her weapons.

In the story mode, in which she appears as NPC, the Monster Hunter hails from Val Habar, a playable area from Monster Hunter 4, which is merged with the fictional Marvel Universe African nation of Wakanda to form Valkanda, and has become a loyal servant of King T'Challa (Black Panther), the ruler of the merged nation. While the kingdom is protected by a time barrier created with the power of the Time Stone, the Hunter captures Ryu and presents him to King T'Challa, thinking him to be an intruder. Ryu informs them that he and a scientist, Dr. Banner (Hulk), were the only survivors of research expedition to understand the anomalies of the Convergence. Immediately afterwards, an enraged Hulk attacks the group, and the Monster Hunter attempts to stop him, but is punched away. When Captain America and Chun-Li arrive and confront T'Challa, the Hunter threatens the Captain for their disrespect towards the king. Once the Ultron Drones begin attacking the city, she and the others fight them. However, the Ultron Drones were carrying the Sigma Virus, and the Hunter senses the Dah'ren Mohran, infected by it.

After Ryu and Hulk defeat the infected Mohran, the Hunter shows appreciation for the heroes, but stays behind with Black Panther to protect Valkanda from any possible invasions from Ultron Sigma.

This Hunter later becomes a playable character, along with Black Panther, in arcade mode and online mode as a DLC character. 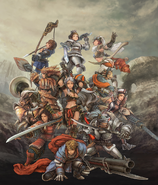 Monster Hunter in Marvel vs. Capcom: Infinite.
Add a photo to this gallery
Retrieved from "https://capcom.fandom.com/wiki/Hunter_(character)?oldid=132817"
Community content is available under CC-BY-SA unless otherwise noted.