Matsunaga is a manipulative, scheming man whose weapons are a sword and gunpowder, the latter of which he can ignite with a snap of his fingers. He is involved in various back stories, such as taking most of the Date retainers hostage and inciting Kojūrō's anger by humiliating Masamune. In another story, he caused Hideyoshi to become drunk with power and turned him from a sane man into the ruthless and ambitious man he is in Sengoku BASARA 2. One of his noticeable traits is that he likes taking hostages and tying them to a pillar. Matsunaga is usually helped by three masked nameless generals, which fans dubbed the "Miyoshi Death Trio" (Hisahide was related with the daimyo Miyoshi Chōkei in history). He later showed his fearsome skills and his intimidating mights, especially when he fought against Ieyasu and Mitsunari, the prominent figures from the Battle of Sekigahara.

In battle, he walks noticeably slow, but sidesteps with great speed. Matsunaga also becomes an interruption man in the Unification Mode, just like Musashi, trying to destroy two gates with superior numbers and distractions using hostages. On Sengoku BASARA 3: Utage, he was selected as a playable character.

A companion of Chokei Miyoshi, he was a retainer of Masanaga Miyoshi from the 1540s. He directed the conquest of the province of Yamato in the 1560s and by 1564 had built a sufficient power-base to be effectively independent. It is believed that he was conspiring against Chokei during this period. From 1561 to 1563, three of Chokei's brothers and his son Yoshioki died. This left Yoshitsugu Miyoshi, the adopted heir when Chokei died in 1564, too young to rule. Three men shared his guardianship - Nagayuki Miyoshi, Masayasu Miyoshi, and Tomomichi Iwanari.

In 1565, the guardians and Hisahide worked together and dispatched an army to capture Yoshiteru Ashikaga, the shogun, who was then either murdered or forced to commit suicide. His brother Yoshiaki Ashikaga fled and the shogun was replaced by his young cousin, Yoshihide.

In 1566, fighting started between Hisahide and the Miyoshi. Initially, the forces of Matsunaga were unsuccessful and his apparent destruction of the Buddhist Tōdai-ji in Nara was considered an act of infamy.

In 1568 Nobunaga Oda, with the figurehead Yoshiaki, attacked Hisahide. Nobunaga captured Kyoto in November and Hisahide was forced to surrender. Yoshiaki was made shogun, a post he held only until 1573 when he attempted to remove himself from Nobunaga's power. Hisahide kept control of the Yamato and served Nobunaga in his extended campaigns against the Miyoshi and others, for a while. In 1573 Hisahide briefly allied with the Miyoshi, but when the hope for successes were not achieved, he returned to Nobunaga to fight the Miyoshi. In 1577, he split with Nobunaga again. This time, Nobunaga turned on him and besieged him at Shigisan Castle. Defeated but defiant, Hisahide committed suicide. He ordered his head destroyed to prevent it from becoming a trophy (his son grabbed Hisahide's head and jumped off the castle wall), and also destroyed a priceless tea kettle that Nobunaga coveted before he died. His son, Hisamichi, also committed suicide in the siege.

Hisahide often appears as a shriveled and scheming old man in fiction. In truth, he was a tall, handsome, and educated man as well as a patron of arts. 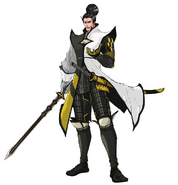 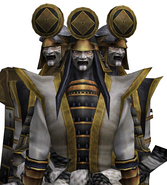 The "Miyoshi Death Trio"
Add a photo to this gallery
Retrieved from "https://capcom.fandom.com/wiki/Hisahide_Matsunaga?oldid=142304"
Community content is available under CC-BY-SA unless otherwise noted.