Higsby's personality is defined by his love of Battle Chips, and he travels across the world looking for them. He is even willing to work for the WWW in order to get them. However, he soon learns the error of his ways and decides to sell chips for a living. Higsby also has a crush on the school teacher Ms. Mari in both the games and anime. In the anime, he is known to be excitable and freaks out often, but becomes a father figure to Shuko Kido.

For the most part, his role in the story is selling Battle Chips in a chip shop. His NetNavi is NumberMan.EXE. He first appears as a professor, working for World Three to brainwash kids and take their rare Battle Chips. After being defeated by Lan Hikari, he opens his chip shop in ACDC Town. 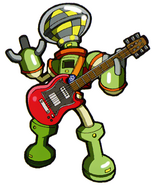 Rockman.EXE Series Master Soundtrack
Add a photo to this gallery
Retrieved from "https://capcom.fandom.com/wiki/Higsby?oldid=128521"
Community content is available under CC-BY-SA unless otherwise noted.