Hideaki Itsuno (伊津野 英昭, Itsuno Hideaki?) (born April 7, 1971) is a Japanese video game director and designer who has been employed by Capcom for most of his career.[1] He is best known as the director of the Power Stone, Devil May Cry and Dragon's Dogma series.

Not much is known about Hideaki Itsuno's early life before he joined Capcom but his earliest known work with the company was in 1995, where he worked on Street Fighter Alpha: Warriors' Dream as a designer. He would go on to help develop many other fighting games throughout the 90's, such as Star Gladiator - Episode 1: Final Crusade, Street Fighter Alpha 3, Street Fighter III, JoJo's Bizarre Adventure, Rival Schools, Power Stone, One Piece Mansion, Darkstalkers and Capcom vs. SNK 2, the latter four where he served as director.[2]

Since its release, Hideki Kamiya has defended Itsuno as not being responsible for Devil May Cry 2's shortcomings,[6], and has expressed disappointment at his exclusion from working on the series.[7]

Following the lukewarm reception for Devil May Cry 2, Capcom chose to return to the design philosophy of the series' more successful first entry for Devil May Cry 3, this time allowing Hideaki Itsuno to work on the project as director on day one of the project's development. Gameplay elements such as the size of environments and the game's battle engine were reconsidered, and common criticisms such as changes to Dante's personality and the game's difficulty were brought back in line with the first game.[8] These changes were met with praise and the game was very well-received.[9]

Itsuno returned to direct Devil May Cry 4.[10] He stated in a Famitsu article that the visual design sought to deliver a satisfying sensation of floating in the air, and that the actions of Nero's Devil Bringer could not be done on contemporary generation consoles, necessitating a new generation of consoles such as the PlayStation 3.[11] Devil May Cry 4 was met with both commercial and critical success.

The next game in the series, DmC: Devil May Cry, was developed by UK developer Ninja Theory; Itsuno was the supervising director on that project.[12] When discussing this decision, Itsuno said: "With DmC this time, we wanted to avoid the problem that befalls some series where you keep making it with the same team, same hardware, and it tends to decrease and fans move away from it... We don’t want the series to die."[13] The development team included over ninety members, several of whom were from Capcom. Alex Jones and Motohide Eshiro acted as producers, aiming to help Ninja Theory make DmC play like the previous Devil May Cry games.[14]

Hideaki Itsuno worked on Devil May Cry 5, which was released on March 8th, 2019.

Itsuno directed Dragon's Dogma.[15] During the press conference at Capcom's Captivate event in 2011, he stated that Dragon's Dogma was a game he had been dreaming of making since his school days; it was finally a project he could realize now due to advancing technology. At the time of the press conference, he had been directing a staff of 150 people at Capcom Japan for three years of concept and project development.[16] By April 2011, the game was roughly half completed.[17]

Itsuno stated that his team had "made Dragon's Dogma and come up to this point through our experience of action games. We're trying to make a new genre: We're using our action heritage and putting that into an action RPG."[15] He cited the influence of Capcom's previous works (such as Breath of Fire,[15] Resident Evil, Devil May Cry, and Monster Hunter), other Eastern RPGs such as Dragon Quest, and Western RPGs such as Fable and Oblivion.[15] Itsuno later explained that they had "seen a great deal of open-world action RPGs]] over the years," but that they still desired "one that really put everything together in the action parts. We figured that if there hasn't been a game made by people who understand how action works, then we ought to do it ourselves. We wanted a game where the player is thrown into the world and needs to figure out how to stay alive via nothing but his own controller." However, the game was designed to allow players to take a less action-oriented approach, with Itsuno stating that they "[made] this game such that you can beat the monsters even if you build up EXP, collect good companions and/or pawns, and sit back and watch the battle unfold"; he elaborated that while it is an action game, "that's not all that it is. You can fully configure your party and put as much thought as you like into battle, which is something we're doing for people who really want to get into this world."[18]

Initially, Dragon's Dogma was intended to be a Western fantasy game.[19] In March 2012, Itsuno said he hoped the game would sell 10 million copies worldwide and one million in Japan.[20][21] It was successful upon release, prompting Capcom to begin development on a sequel.[22] Itsuno reports that the team was only able to accomplish 60-70% of what they had wanted to in the first game, and hope to include those ideas in the sequel.[23] At the Electronic Entertainment Expo 2018, Devil May Cry 5 was officialy revealed, with Itsuno serving as director.[24]

In October 2012, Itsuno hinted that the Rival Schools and Capcom vs. SNK series may see a revival.[25][26] The former series was once again hinted in the next year, alongside Itsuno's interest in developing a fighting game that would recreate the influence Street Fighter II had on the genre.[27] Hideaki Itsuno has also expressed a desire to make a direct Dragon's Dogma sequel[28][29] as well as a sixth Devil May Cry mainline title.[30] 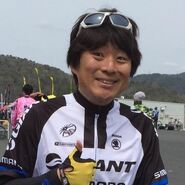