Helena Harper is a character from the Resident Evil series of horror games and one of the major characters featured in Resident Evil 6. In the game, she is partnered with Leon S. Kennedy.

Helena is a special agent working for the Division of Security Operations (DSO), a supposedly secret military branch of the United States government. Following her tenure working for the DSO, she became a member of the United States Secret Services and now serves protection detail for President Adam Benford. Helena accompanied the president to his keynote speech at Ivy University in Tall Oaks, however a bioterrorist attack lead to his eventual death and Helena blames herself for what has happened, though Leon doesn't understand why.

Helena discovered that her younger sister, Deborah Harper, was hospitalized by her physically abusive boyfriend. Overcome with anger, Helena retaliated by shooting and injuring the man. Her superior reported to Ingrid Hunnigan that Helena's candidacy for the DSO was to be no longer considered, and that she would be required to report to the United States Secret Service. These incidents impressed Derek C. Simmons, the National Security Advisor, and he began to manipulate Helena's career by having Deborah kidnapped. Willing to do anything to protect her younger sister, Helena agreed to Simmons' demands. She was to help him bypass the president's security when he visited Ivy University in Tall Oaks to give his speech to the American people - a speech that would reveal the truth of the Raccoon City Incident and the U.S. government's involvement and support of the Umbrella Corporation's bioweapons. On the day of the speech, Helena sent out a false alarm over the radio to tell the agents protecting the president that a group had entered the campus with the intent of assassinating him. The agents left, leaving President Adam Benford vulnerable. By the time Helena and Leon got back to Benford, he had already been infected, the agents finding him in the midst of feeding.

Next began a journey in which Leon accompanied Helena to Tall Oaks Church, in an effort to find out the fate of her kidnapped sister.

Helena is also a playable character in "The Mercenaries" mode. She has three different costumes: her default business attire, her outfit while in China, and a Raccoon Police Department policewoman uniform.

Throughout the events in the game, Helena shows an extremely high degree of marksmanship, being able to hit a precise target in an instant, such as shooting a zombie in the head while in the act of turning, as well as being able to fire upon the mutated Simmons, making the same shot without being fazed by the distraction of a potentially dangerous piece of debris flying at her. Helena shows being capable of handling even exotic firearms, namely unique her Hydra shotgun, being able to fire three shots in rapid succession and reloading immediately afterwards, all while only consuming one stamina bar. She is athletic and capable. On several occasions, she demonstrated feats of body strength that match Leon, such as being able to hold a door partially shut with two zombies trying to push their way through, as well as being able to easily climb a vertical cable wire hand-over-hand. It is implied that Helena is also familiar with piloting helicopters, as shown when Leon and herself finally defeat Simmons. 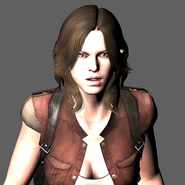