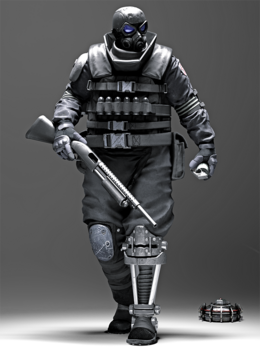 Hector Hivers, codenamed "BELTWAY", is a heavily-built member of the Umbrella Security Service. He's an expert on explosives weapons; wearing equally-heavy armor with a grenade belt along the waist, and having a prosthesis for left leg.

Originally from Puerto Rico, Beltway discovered early in life that making people laugh was a good way to earn trust and friendship. As time went by, his practical jokes became more physical in nature, and often involved the complete humiliation of his target.

When he discovered explosives could play a key role in his unique sense of humor, his future path became clear. The irresistible lure of military grade explosives saw him join the army and channel his tendencies into a career. However, he still had not learned restraint, resulting in a dishonorable discharge which was just one step away from a court martial.

Beltway lacks any sense of compassion and realized his special talents were a perfect fit for the U.S.S.; as long as he is able to be kept on a short leash.

Beltway is generally the most comedic member of Wolfpack who often pokes fun at the situation they're in, though his dark and morbid sense of humor hasn't faded away from him either.

He also has a very vulgar vocabulary, as he curses in nearly all of his dialogues and curses more than any Wolfpack member in general.