Heavy Metal: Geomatrix is a fully 3D arena fighting game released in 2001 by Capcom for the Sega NAOMI and Dreamcast, based upon the Heavy Metal magazine license.

Using similar perspective and control scheme to Capcom's Spawn: In the Demon's Hand, the game presents up to 4 players combats in large arenas in what is seen as a follow up to the basics of Capcom's Power Stone series, although more oriented to weapon fighting/shooting and a serious and dark cyberpunk tone because of the Heavy Metal universe setting.

The game features a soundtrack of licensed music by artists such as Megadeth, Halford, W.A.S.P., Corrosion of Conformity and Dust to Dust. A soundtrack CD featuring songs used in the game as well as songs from other artists was released by Sanctuary Records to tie in with the game.

Tetsuya Shibata worked on the original music in this game. 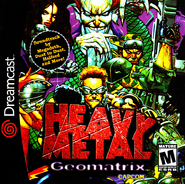