Heat Man (ヒートマン Hi-toman) is a character from the classic Mega Man games.

Heat Man is a battle robot created by Dr. Wily using Fire Man as a basis; his body is modeled after a Zippo lighter. He is able to produce flames up to 12,000 degrees Celsius in temperature from his compression-type blaster. Though he excels at heat-resistance and manipulating flame, he's seemingly unaware that he has a dial which regulates his heating power on his back.

Heat Man's primary weapon is called Atomic Fire, with which he can throw condensed fireballs that explode into flame pillars when they hit the ground. He can also envelope his body with hot flame and perform a body tackle.

Despite being based off of Fire Man, Heat Man likes to do things at his own pace and often lacks enthusiasm. He enjoys barbecues and dislikes ice cream.

In Mega Man 2, Atomic Fire was the first chargeable weapon from the Mega Man games. 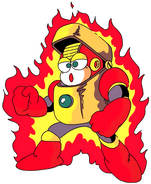 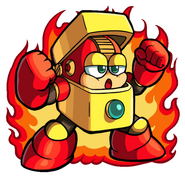 Street Fighter × All Capcom
Community content is available under CC-BY-SA unless otherwise noted.