Hayato has black hair with thick eyebrows (brown in some UDON promotional artwork and official comic art) with a long single grass on his mouth, and is dressed in a red track suit with a white shirt and sneakers.

Hayato is Taiyou Gakuen's number one lady-killer and physical education teacher, as hot-blooded as his name implies. He developed his own sense of justice. Corporal punishment was also one of his own ideas. His students draw a ferocious, inescapable, unstoppable force from Hayato's own sense of justice. When his students at Taiyo were attacked, Hayato became suspicious of the elite academy, Justice High. He joins Batsu Ichimonji, Hinata Wakaba, and Kyosuke Kagami in the fight, watching over them.

Sometimes, it's pretty obvious that Hayato is infatuated with Kyoko, despite her connection to Hideo; he makes an open reference to her being attractive in his "good" ending in Rival Schools.

Hayato was designed by Kazuhiko Shimamoto, a noted mangaka (Japanese comic author). Unlike Karin and Evil Ryu (who were created by Masahiko Nakahira, another well-known mangaka), Capcom does not own Hayato; this is reflected in UDON's Capcom Fighting Tribute artbook as UDON stated that people were not allowed to draw Hayato in the book due to legal issues involving Shimamoto.[citation needed]

Hayato is a teacher of physical education at Taiyo High School. He first appears in the PlayStation version of the game as a console-exclusive bonus character. In the story, he sets out to find the source of the school abductions, as he believes the students are unable to do so themselves. In his non-canonical ending, he secretly defeats Hyo and he puts a letter mark on Hyo's head and leaves Justice High School before Batsu, Hinata, and Kyosuke arrive to fight off Hyo.

Hayato joins fellow teachers Hideo and Kyoko in investigating a new threat to the schools a year later.

Upon meeting the fake Batsu from within the Taiyo High storyline, Hayato immediately points out that the person he, Hinata, Kyosuke, and Chairperson were confronting at the time was a fake for a peculiar reason: the fake Batsu "lacks the fire" in the real Batsu's eyes, something that the fake Batsu found funny. When Hinata is about to be attacked by Kurow, the real Batsu arrives in time by hitting him with a powerful Burning Super Guts Bullet and Hayato was impressed to see his student return, giving him some advice about his fake self before having his injuries treated by Chairperson.

Hayato later rejoins up with Hideo at the mountainous region as they confront the fake Batsu, revealed to be Kurow in disguise and the one responsible for attacking Raizo in the director's office at the start of Project Justice. Both are also surprised to see Kyoko kidnapped by him as Hayato challenges Kurow to a fight. Hideo successfully rescues Kyoko and they team up with Hayato to face Kurow. After the fight, they arrive at Justice High School to see Kurow's defeat by Hyo (who is possessed by his late father's spirit) and the trio prepare themselves as they engage in a deadly and dangerous fight against Hyo.

After the incident and Hyo's death, Hayato and Kyoko later visit both Hideo and Raizo at the hospital, with Hideo himself being recently hospitalized due to the physical injuries that he had sustained during the fight against Hyo. Due to his feelings for Kyoko, Hayato allows Hideo to be with her and he envies him for being "a lucky man". When Kyoko reminds Hideo about both their upcoming wedding and marriage, Hayato happily congratulates them with tears of joy while laughing happily.

Hayato fights using kendo, a modern Japanese martial art. Most of Hayato's techniques involve the use of his shinai (竹刀), the bamboo sword used in kendo training. Hayato also uses some hand-to-hand fighting.

Hayato is a very limited character in terms of Rival Schools attributes. He has very limited air-combo capability, and even fewer options for Textbook Combos. The best way for a player to emerge victorious is to have Hayato continuously poke at the opponent with quick double Light Punches or double Light Kicks. Next, the player can go for a throw when the opponent might expect the Textbook Combo to continue. The player can lure an attack so that they can Tardy Counter back. After the Tardy Counter, the player can inflict a good deal of damage. Also, when jumping up, if the player immediately presses Light Kick and then High Kick while falling again, they can catch the opponent off guard.

Hayato's Team-Up Technique (TUT) is semi-quickly initiating. It doesn't do all that much damage, but it works great for countering an opponent's TUT.

Being one of the few characters to wield a weapon, he can deflect certain projectile attacks back to his opponent. His High Air Launcher, which makes use of the shinai, does just that.

He has the weakest damage in some of his special attacks. He can only be damaged when he pulls his combo to the opponent and his Nekketsu Windmill. 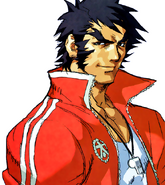