Hauzer (ハウザー, Hauzā?) is a fighting game character, introduced in the arcade fantasy-themed 2D fighting game Red Earth as one of the eight unplayable boss characters.

Hauzer was originally a fossil from Greedia, he is now a Earth Dragon resurrected by Scion, and inhabits the Greedia stage.

Hauzer appeared in Capcom Fighting Evolution as a playable character, along with Leo, Kenji and Hydron.

Hauzer is a powerful and resistant beast resistant to fire and lightning, but is unable to defend itself and is weak to ice attacks. Due to its large size, Hauzer is immune to throw attacks. 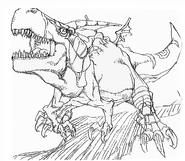 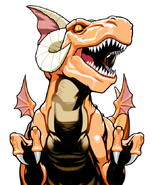