Hanbei is a brilliant strategist and tactician, serving Hideyoshi Toyotomi. He is as quick with decision-making as he is with his movements and attacks. However, Hanbei doesn't hurry in enjoying his life, since he doesn't know how much longer he will live due to illness. He owns the castle of Inabayama. Hanbei's weapon of choice is a whip-sword and his element is darkness.

Hanbei's typical attire has him wearing a mask and dressed in purple and white with accents of grey. Although appearing youthful, his hair is prematurely white.

In Sengoku BASARA 4 Sumeragi, Hanbei, propped up against a tree, finally succumbs to his illness in the presence of Hideyoshi.

Shigeharu Takenaka (September 27, 1544 – July 6, 1579), who was also known as Hanbee/Hanbei Takenaka, initially served the Saito Clan of Mino province, but later plotted an uprising and took over the Saito castle at Mount Inaba. Hideyoshi Toyotomi was so impressed by this tactic that he invited Shigeharu to join his forces as a strategist. Shigeharu made many contributions to Hideyoshi with his exceptional talent in that field.

He died of illness during Hideyoshi's attack against the Mōri in the Chūgoku region of Japan, while Miki Castle was being besieged. Shigekado Takenaka, Shigeharu's son and successor, continued to serve Hideyoshi after his father's death. At the Battle of Sekigahara, he fought on the side of Ieyasu Tokugawa and his holdings at Bodaisan were secured. The Takenaka family thus became a family of Hatamoto, and would soon move from their old castle of Bodaisan to the new Iwate castle. The holdings of the Takenaka included Sekigahara Village. In the mid-19th century, Shigeharu's descendant Shigekata Takenaka served as commander of the Tokugawa forces in Fushimi at the Battle of Toba-Fushimi. 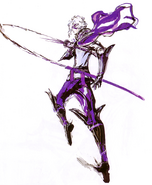 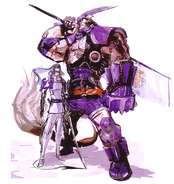 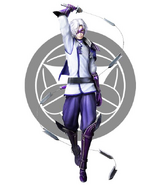 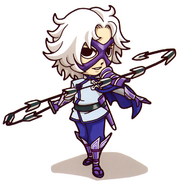 Wallpaper
Add a photo to this gallery
Retrieved from "https://capcom.fandom.com/wiki/Hanbei_Takenaka?oldid=141326"
Community content is available under CC-BY-SA unless otherwise noted.