Gunrock is a fighting game character from the Power Stone games.

Gunrock comes from the town of Dawnvolta (spelled Dawnbolta in manual). He is 38 years old, weighs 440 pounds, measures 6'4".

In the anime, his bandanna and gloves are yellow, his golden yellow thick scarf is brown with two white stripes at the edge and his green pants have a blue heart shaped sewn at the back.

This miner from Dawnbolta has nerves of solid steel and never gets upset. He is journeying from mine to mine to excavate the legendary Power Stones. In fighting, he relies on his unrivaled strength.

In his ending, Gunrock finds the Power Stone he had been searching for. Back in his hometown at his favorite bar, he is seen playing cards. With help from his Power Stone, he gains a winning hand and wins the game. He buys the entire bar a round of drinks while confidently holding up a glass in one hand and clutching his Power Stone in the other.

Gunrock is bored with his everyday life. One day, he hears about a floating castle. They say it guards an ultimate treasure that no one has ever seen.

"I must get the treasure!" A few days later, the floating castle emerges from the clouds as the rumors foretold. Gunrock gets into a huge cannon, points it toward the castle ... and fires!

"Wait for me! All the treasures in the world will be mine!"

Gunrock has a bar-room brawler fighting style. As a power fighter, he is one of the strongest characters but also one of the slowests, making it hard to avoid attacks. He can throw heavy objects faster than any other fighter and has good range with his Power Drives. His earthquake can stun the opponent so they can't avoid the attack unless they jump first. In Power Stone Collection, he unlocks the Giant Boots.

In the anime, he is from Gold Land and has five children. Falcon meets him for the first time at the Gold Land casino where he challenges him to a game of poker and bets his Gold Stone for his Power Stone. However, Falcon ended up losing the game and had no choice but to surrender his Power Stone to him. Falcon later on pays a visit at his place and begs him to return it to him. Gunrock agrees but tells him that he must first fight him to win it back. During the battle he reveals that his stone is similar to Falcon's and that he can change into Heavy Tank with it.

Gunrock apparently had a crush on Ayame's brother and even wanted to marry him until he found out his true gender. In the end of the anime, Gunrock eventually ends up marrying a girl named Cassie (who originally liked Falcon) and had three more children with her. Like Wang-Tang, Gunrock does not travel with Falcon and also has many absences in the anime. In the game, his bandana and gloves are blue, but in the anime, it is yellow. 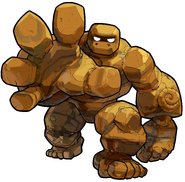 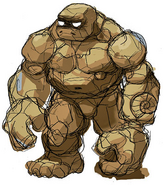 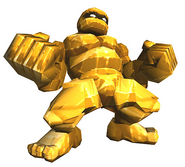 Gunrock versus Edward (in his Power Change form).

At the beach with several Power Stone characters and Regina (left) from Dino Crisis.
Community content is available under CC-BY-SA unless otherwise noted.
Advertisement