Nicknamed the "Florida Wild Horse", Gunloc grew as a street fighter in the slums. He trained under Mike Haggar along with his friend, rival and fellow wrestler Biff Slamkovich, and they became famous CWA wrestlers.[1] Gunloc once tried to put the moves on Mike's daughter Jessica, but after she ignored him, Cody got into a fight with him for it. He later did it again, and Haggar was not amused by this, which caused them to get into a fight.[3]

In contrast to Biff's disposition, Gunloc is quick to anger. This berserker style of wrestling has cost him a couple of victories in the ring.

Gunloc has yet to make an appearance in the mainline Street Fighter games, but a character relations chart in Street Fighter V: A Visionary Book lists him as part of the CWA alongside Biff.[4]

In Blade's ending in the Street Fighter: The Movie arcade game, he is revealed to actually be Gunloc acting as a deep cover agent in Shadaloo. After defeating Shadaloo, Gunloc is stated to have returned to his wrestling career. 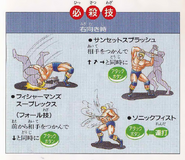