Capcom Database
Register
Don't have an account?
Sign In
Advertisement
in: Games, Shoot 'em up Games, Shooter Games,
and 8 more

Gun.Smoke is a vertical scrolling shoot 'em up arcade game released in 1985. It was ported to the NES and is also included in Capcom Classics Collection (for the PlayStation 2 and Xbox) and Capcom Arcade Cabinet (for the PlayStation 3 and Xbox 360). The game has a Western theme and centers around Billy Bob, a bounty hunter who is after vicious criminals of the Wild West. This game is considered to be one of the hardest games Capcom ever made.

Despite the game's name and settning, it has no connection to the 1955 Western TV series of the same name. To emphasize this lack of connection, there is a period between the Gun and the Smoke in the game's name.

Gun.Smoke is a vertical scrolling shooter game, in which the screen scrolls upward automatically. Players only have three ways to shoot; using three buttons for left, right, and center shooting. However, a player can also change the way Billy shoots through button combinations. Players can die by getting shot or struck by enemies but improve protection by getting special items, including a horse, for protection up to three hits; boots, for speed of movement; bullets, for faster shots; and rifles, for shot length. These items are found by shooting barrels and rifles, boots, and bullets can stock up to five.

There are also other items that are used for points like stars, bottles, bags, dragonflies, and cows, but two other items to watch out for are the Yashichi (Capcom's version of a 1-Up) and the cattle skull, which reduces Billy's power. There are obstacles in the game such as streams, buildings, and hills but they do not cause damage to Billy even if he is caught between the screen and the obstacle. The Bosses in the boss battles have a big life gauge with sometimes four to six blocks of life, which proves to be a real challenge to players because they had to survive long enough to take out the boss and various minions.

Each level in the game is given a name in the NES version. These are the names of each level and the bosses of them:

From the arcade version to the NES one, the bosses Master, Wolf Chief, Los Pubro, and Fat Man were respectively renamed as Bandit Bill, Devil Hawk, Wingate and Fatman Joe.

In both the NES and Famicom Disk System versions of the game, the game has to be beaten 3 times in order to obtain the true ending, in which the player is rewarded with a simple message that types out as "THE END".

Gun.Smoke, like many other games during this era of gaming, credited its staff in its default Score Ranking Table, which is as follows:

The music for the NES port of the game was composed by Junko Tamiya (credited as Swimmer Tamichan).

Red Dead Revolver, the first game in Rockstar Games' Red Dead series of western action-adventure games, was originally developed by Capcom as a spiritual sequel to Gun.Smoke, before they dropped the project which later got picked up by Rockstar Games. 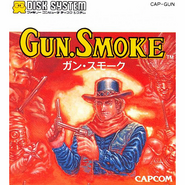