Gravity Beetle (Gravity Beetbood in Japanese) is a character from the Mega Man X series. First appearing in Mega Man X3, he is a Maverick based on a Japanese rhinoceros beetle.

He has a brother named Boomer Kuwanger, a stag beetle-based Maverick in the original Mega Man X game. After the death of Kuwanger, Gravity Beetle joined Dr. Doppler's army.

Similar to fighting Wood Man in Mega Man 2, Gravity Beetle will jump on a space as he cannot walk at all. Sometimes, Beetle can throw a Gravity Well to make things difficult. This can be cancelled when Mega Man X shoots him with Ray Splasher. Other Gravity Wells can be annoying to X. Once he's creating a large dead lift, this is very annoying, so X has to use Ray Splasher repeatedly to let Beetle cancel this. If he's close to the wall, X should wall kick and jump over him. Later, Beetle can dash at X, causing bad damage. 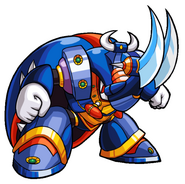 Street Fighter × All Capcom
Add a photo to this gallery
Retrieved from "https://capcom.fandom.com/wiki/Gravity_Beetle?oldid=131132"
Community content is available under CC-BY-SA unless otherwise noted.