Gourmand is a fighting game character and an evil chef from the Power Stone series, introduced in Power Stone 2.

He is a large character, but not as slow as Gunrock (the biggest character). He wields a chef knife prior to Power Change. In his Power Change he looks similar to a dinosaur, known as the Evil Chef.

Although he originated from the sequel, he was made available for use in the first game Power Stone in Power Stone Collection.

Gourmand is head chef on the luxurious airship Royal Heaven, which cruises around the world. Secretly, he is a ravenous chef who will do anything to get his hands on rare delicacies. One day, he learns about the existence of a mysterious flying castle.

"Does it have new ingredients no one has seen before?"

Conveniently, a huge dark shadow falls across his airship, making it tremble. Gourmand jumps ship with his kitchen knife and frying pan in hopes of finding new food to tickle his fancy.

"This is my lucky chance!"

Gourmand has average speed and powerful attacks, and is a larger character. He has the longest reach of all fighters, thanks to his kitchen knife and frying pan. His attacks after Power Change are very powerful and have long range, but can be difficult to wield. Plat de Rêsistance needs to be done close to the opponents because when you move him, he goes slow. His Fall Etansel is difficult to aim as well. In Power Stone Collection, he unlocks the Wok Gun. 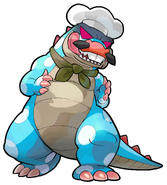 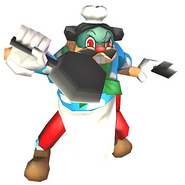 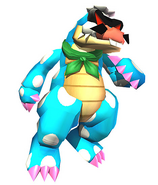 Power Stone 2
Add a photo to this gallery
Retrieved from "https://capcom.fandom.com/wiki/Gourmand?oldid=121169"
Community content is available under CC-BY-SA unless otherwise noted.