Gore is a big-brained pointy-eared tanned Indonesian; despite speculations that he is originally an alien, his current appearance comes from his misuse and abuse of Plasma Magic, which has deformed him as a side effect. He fights with a Plasma Mace and he seeks to gain more knowledge about Plasma Wizardry and power any way he can. Due to a mental disorder and his harsh upbringing, Gore has a hard time understanding the concepts of right and wrong, and has little sense of cruelty or empathy.

A genius magician, Gore was born in Bali, Indonesia to a very large family of 14, including his mother, his father, and his 11 older siblings. While the youngest, Gore suffered from a genetic disorder that made him intellectually handicapped, and to his family, they often made fun of him or avoided him for it. Within Bali, the Gajah name was associated with magic, since Gore's father performed exorcisms and invoked spells. One day, Gore imitated his father when he left for a short while. When Gore closed his hands in invocation, all of the aliments of the waiting patrons were cured, and they soon stood up in praise. Since then, Gore grew to fame on his own from his unusually strong supernatural powers, such as growing to unbelievable heights and his command of many unique magical techniques.

However, Gore soon drew ire from his family, becoming overshadowed by his fame. One day when Gore was evoking his miracles, his father tried to seal Gore's powers. When his father jabbed him hard with his stick to enact the sealing of Gore's powers, Gore in return retaliated in rage, and caused his father to swell up like a balloon before blowing up into pieces.

From within the crowd, a man dressed in black who came to see the almighty Gore introduced himself. Letting the boy know that he was the world famous physicist Dr. Edward Bilstein, Gore asked the scientist if it was more entertaining to kill people than to heal them. Correcting the boy for his rudeness, he let him know that the power he wielded was that of Plasma Power, and that he wished for Gore to join him. As his questions went unanswered, Gore left with Bilstein, seeking to pique his curiosities, including to know what were his powers, and the morbid curiosity of that unanswered question.

As Bilstein's power grew, Gore had access to his master's resources. Soon, he came to learn a greater deal on the world, and the knowledge that was not given to him as a child, including all subjects of science, medicine, and even to matters on magic itself. As Gore consistently used his powers, he soon discovered the correlations between magic and Plasma Power, and claimed his own as Plasma Wizardry. But as time passed, and with each time he used his Plasma Magic, the side effects would become known; his brain soon bulged out of his head, his body swollen and deformed, and his eyes fell out of his head. But this did not disturb him.

All the while, Gore played with the human subjects his master provided, like a cruel master to its toys. Then one day, the authorities arrested Bilstein and Gore for their experiments. Sent to Zeta with his master, Gore was not able to cruelly play with human lives, but his master had more in store. Goading on for Gore to do just a bit more, Bilstein promised that the billions of people on Earth would soon be his to toy with. And so, did Gore await that promised time, and helped to make it a reality.

During the events of Plasma Sword, Gore had gained much knowledge about Plasma Wizardry, feeling and believing that the theories and formulas of Plasma Power should belong to him and not to Bilstein. At one point, Gore had created an artificial alien-esque girl named Luca to act as both his fiancee and his personal assistant.

Bilstein had felt and decided that Luca was a possible security threat to him and the Fourth Empire and from within due time, Bilstein had ordered Gore to end Luca's life, but Gore had went against Bilstein's command and disappeared with Luca from within an instant. It is unknown of what happened to Gore and Luca after the events of Plasma Sword, but it is implied that the two of them may have developed romantic feelings for each other (or at least Luca seem to have developed these feelings) and that they may have gone into leisurely seclusion.

"Sorry fools, but I'm bored of messing around with this Fourth Empire game. No challenge! Why did I even waste my time?"

Conquering Earth meant nothing to Gore. He just wanted to play with his favorite new toy--the human race.

"Well, how can I amuse myself now? Can I play a new game with them? Oh, maybe I should burn them!"

Where is Gore's insane desire leading him? Only one thing is certain. When next he stands on the Earth's ground, humans will face the real demon.

Gore and Luca have an interesting conversation.

Gore and Luca have a conversation after Claire's defeat.

Gore alters his appearance to a handsome man. The two are now on a beach in swimwear. 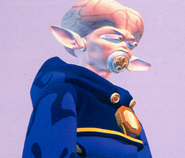 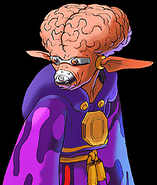 Plasma Sword
Add a photo to this gallery
Retrieved from "https://capcom.fandom.com/wiki/Gore?oldid=135786"
Community content is available under CC-BY-SA unless otherwise noted.