Giant Moth are enemies from the Resident Evil series. They are sometimes poisonous and always enlarged due to prolonged exposure to the T-Virus.

In Resident Evil 2, it cannot fly due to its abnormal growth and increased weight. It nested in the security room, and just outside the room were the larva, which can fall down and cause minor damage. The moths' main attacks are to spray their enemy with poisonous powder or to charge. They are encountered again in Resident Evil: The Darkside Chronicles.

The moths in Resident Evil Code: Veronica in the Antarctic Research facility, also have a poison powder attack. They can lay eggs on a target's back which stay on, until they hatch and cause damage.

In Resident Evil Survivor, only two moths appear in the game, and are smaller than the ones in Raccoon City.

Moth Parasites are the hatched larva of certain variations of a T-Virus-infected moth that bursts from a host's chest and latches onto its victim's back. When its host is damaged enough, the parasite leaves their host's chest cavity and lands on a new host's back. It can survive for a while after the host is dead, and can attack by grappling its prey. They are poisonous. 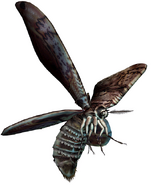