Many different people, warriors with no honor

Eventually, Akuma was once again challenged by Gen, but although the results of the battle are unknown, Gen did survive (it is most likely that Akuma only fought him in a regular fight instead of a battle to the death).

Gen, haunted by nightmares where he is surrounded on all sides by the ghosts of those he has killed in the past when he was still an assassin, scorns the ghosts and says that while he is still alive, he will not succumb to the likes of them. Reflecting on how Chun-Li has grown into a strong and admirable woman, he knows he cannot protect her for much longer, as his time is running short. He remembers the day when his illness allowed Shadaloo to capture her father; cursing his body and its "infernal frailties", he vows not to let them get away.

He joins the S.I.N. organized tournament, and at some point Chun-Li finds him and demands that he tell her all that he knows about what happened to her father. Gen quitely fades away, leaving her alone in her mission to stop S.I.N from taking over the world. When the S.I.N. base is destroyed, Gen protects Chun-Li from the ensuing collapse, though it's not shown how. While partially trapped under the rubble, Gen witnesses Akuma and Gouken fight over an unconscious Ryu when the Satsui no Hadou is sealed off for the time being, internally referring to the two fighters as "Life and Death". He muses that "Death is indeed strong.". Impressed by what he called their "ultimate battle", in which both men were "prepared to give up the ghost", Gen resolves not to die until "the final battle between Life and Death", so he returns to what he calls "my own fight to the death". 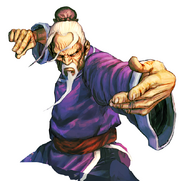 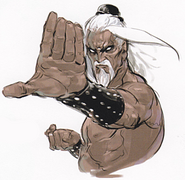