Gantetsu is a character from the Star Gladiator series of 3D fighting games who appears in the second game, Plasma Sword: Nightmare of Bilstein.

An extremely strong Japanese military war soldier and heavy drinker who fights with a Plasma Axe. Even though Gantetsu lacks strategic thinking, he makes up for it with his tough stamina and relentless endurance in combat.

Under orders from his superiors in the Earth Federation, Gantetsu is given the mission of tracking down Franco Gerelt for his war crimes against humanity. Upon managing to capture Gerelt and learning of his tragic story, Gantetsu quickly forgives him and takes him to a bar for a victory drink. 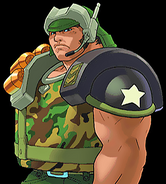 Vector and Gantetsu. Art by Hideki Ishikawa.
Add a photo to this gallery
Retrieved from "https://capcom.fandom.com/wiki/Gantetsu?oldid=125483"
Community content is available under CC-BY-SA unless otherwise noted.