Techniques based on Sumo wrestling.

Gan is a big and fun-loving guy with immense physical strength, which appears to be the only thing worth his pride. On many other things, he is so simple-minded that he'll believe just about anything. And for that, he'll almost never notice if someone is taking advantage of him. He always looks forward to having three meals a day, each meal always having five cups of rice stacked on top of the other in his bowl. For snacks, he likes onigiri (rice balls).

Gan is a student from Gedo High who also doubles as a loyal member of the school's gang. He and Edge joins a disguised Akira from within her personal mission of having to find and locate the whereabouts of the school's missing gang leader Daigo, who happens to be the older brother of Akira. Like Edge, he too is initially distrustful of Akira at first, but eventually comes to accept her as a part of the gang even after she reveals her own true identity to them.

His ending has him inspired by his experiences from within the adventure to begin studying hard in class, albeit without much success. Edge notices Gan studying, with the latter replying that Akira had told him to study harder if he wants to gain more respect from other people. However, from within Gan's irritation and frustration of studying, he rips the textbook in half, stating that it was annoying. Akira later arrives and scolds Gan, telling him that the textbook he had ripped in half was not free, much to his disappointment.

Gan's role is much similar to Edge's, with the two of them being ordered by a returning Daigo to attack random schools for little to no reason whatsoever. In due time, both Gan and Edge suspect that something unexpected had happened to Daigo during his personal training journey and the two of them soon learn that Daigo himself was brainwashed by Kurow, who had sought to cause tension and distrust among the schools as a part of his evil plan. During the school gang war between Gedo High and Seijyun High, Gan and Edge wastes no time in coming to Akira's aid, who tries to wake her older brother up from his brainwashed state, but to no avail. She is then forced to fight against him with their assistance. While that's happening, Zaki hears an unexpected whistle noise and soon realizes that Yurika is playing Kurow's flute in order to control Daigo from within his brainwashed state. As Daigo is eventually freed from his brainwashed state, he reunites with both his younger sister and his friends, stating to them that the unified strength of their own combined punches had truly freed him from his brainwashing.

After Kurow reveals his true identity to the group at the mountain area near Justice High, he attempts to brainwash Daigo once again by playing his flute, with Edge attempting to attack Kurow in order to stop him, only to be blocked by Momo. Luckily, Zaki manages to get Kurow's flute with her chains and that Daigo himself soon returns back to normal in due time.

After both Kurow's defeat and Hyo's death, Daigo, who recovers from his brainwashing and realizes that he needs to improve himself both physically and mentally in order to make sure and see to it that something like this doesn't happen again in the future, leaves Edge and Gan in charge of watching over Gedo High until he returns while also giving his school jacket to Akira, saying his good-byes to them as he leaves to train once more from within another personal training journey.

Most of Gan's techniques are based on Sumo wrestling. Due to his size, however, he is extremely slow, making him a very difficult character to play. As compensation, he has many skills, some of which are highly damaging. His Team-Up assist is one of the four most damaging Team-Up Techniques in the game, tied with Momo's, Wild Daigo's and Shoma's in terms of damage rating. 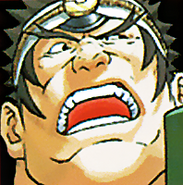 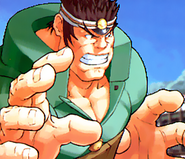 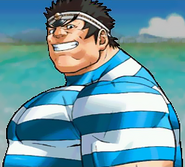 Project Justice
Add a photo to this gallery
Retrieved from "https://capcom.fandom.com/wiki/Gan_Isurugi?oldid=137638"
Community content is available under CC-BY-SA unless otherwise noted.