N/A (in De Rosa time, he is 29 years old, but it is unknown how much of Earth time is equal to a De Rosa year)

Gamof is a brown-furred alien who fights with a Plasma Axe and has a kind and friendly personality upon sight, but when angered, Gamof can easily become an unstoppable force in combat.

Gamof comes from the forest planet of De Rosa, which lies from within the Andromeda Galaxy of the universe. A somewhat cold but lush planet, the De Rosans are a mammal like peaceful race that emphasize nature and family. The Gohgry family is no different, and were a long lineage of foresters who made their living off of the land. At a young age however, Gamof's father would perish in an untimely accident, and the young Gamof took it upon himself to succeed in his trade for his sickly mother and newborn brothers. As Gamof grew up into a noble lumberjack befitting his family's heritage, another catastrophe would soon come about. As trade opened between Earth and De Rosa, it would be discovered that a De Rosan originated species of thistle held extremely strong opiate like properties, and could be processed into a super potent drug known as White Haven, that would give a high 3000 times stronger than morphine. Due to this, this crucial part of De Rosa's ecology and biosphere was soon turned into black market haven for underworld cartels. Along with rife government corruption and a weak campaign against the White Haven trade, it would soon be discovered that the White Haven thistle acted as a natural ecological defense against foreign invasive pathogens and micro organisms. When an unknown Earth microbe virus makes its way onto De Rosa at the height of White Haven over harvesting, this destroys nearly all of De Rosa's own forests.

Sending nearly all of De Rosans into off planet migratory work, Gamof is among the many who is devastated by the White Haven aftermath. Attempting many lines of work, Gamof's hardships would be furthered by the corrupted De Rosan government's ban on off planetary work and his homeworld's economic inflation. Even when pressed into more unwholesome options, Gamof refused to curry favor to the officials to work off world, knowing that his family's reputation would be tarnished by this dishonorable act, and that his benevolent demeanor did not fit the ways of crime. With no other options, Gamof would reluctantly turn to the line of a bounty hunter. Due to his gentle appearance, Gamof's career would not be easy, as he was turned away from higher paying bounties for not appealing to a tough and intimidating image to capture his marks.

Out on a lowkey bar at an interstellar relay station, Gamof drank away his sorrows. Little did he know, a man from Earth would pull up a seat next to him. It was none other than Hayato Kanzaki, whose reputation throughout the bounty hunting scene had made a bit of waves due to his no nonsense justice and strict principles that avoided the more dubious jobs and made him known as a clean outstanding hunter. Knowing too well that the gentle giant was overlooked at the bounty centers due to his peaceful and unimposing air, Gamof would agree to be Hayato's partner, as Hayato trusted the beast, who reminded him of his disappeared parents. As their friendship would come to a rocky start, and even as times would come that Hayato would possibly become ruthless enough to claim the dead award of a bounty, Gamof enjoyed each moment, as Hayato reminded him of his brothers on De Rosa.

Later on in their careers, Hayato was soon pitted at a crucial moment in his life. Doing his best to hide it, he soon came across a crucial ad by the Earth Federation and took note of the potential massive bounty it had. Knowing that this job would sweep their problems clean, Hayato showed it to Gamof, and let him know that he could create an estate with his earnings. Finding a solution to his financial woes as well, Gamof agreed to join Hayato on his quest to join the Star Gladiator project.

Gamof aids Hayato, June, and Saturn in battling against the Fourth Empire and from within the process, Gamof also has a personal battle against a black-furred evil contender of his alien race who works for the Fourth Empire. Years later, Gamof is visited by June and her young daughter Ele and from within the conversation, June tells Gamof that she had wanted her daughter to see the beautiful rich nature of De Rosa, since Earth itself has no real nature left.

Back on his home planet of De Rosa, Gamof has purchased the woodlands with his reward money. He's decided to go back to his peaceful life of being a lumberman. To ensure that the woodlands would never be corrupted again, Gamof formed and is the leader of an organization against drugs.

One day, after coming home from a hard day's work, Gamof's family greets him.

"Tell me again, brother. Tell me the story of the Star Gladiator."

Pressed by his younger brothers, Gamof begins to tell his favorite story...

In one of Gamof's endings, he must fight a black-furred evil contender of his alien race before he is seen with June and Ele, her young daughter.

Gamof has returned to the planet De Rosa after defeating Bilstein. But there is still something he must do...

Next, Gamof is seen in a forest facing off against a black-furred evil contender of his alien race.

They battle each other, and after the evil contender is defeated, time passes...

Gamof, June and a little Ele are seen standing in the forest. 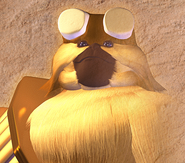 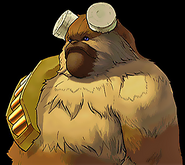 Plasma Sword
Add a photo to this gallery
Retrieved from "https://capcom.fandom.com/wiki/Gamof?oldid=135492"
Community content is available under CC-BY-SA unless otherwise noted.