He is from the town of Dullstown. Galuda is age 28, weighs 98 kg, measures 190 cm. When in Power Fusion, the "Proud Eagle" is similar to a totem pole.

Galuda has long black hair which is tied in a low ponytail, black eyes, and he wears a blue indian headdress. He wears a pair of yellow native pants with blue lines in both sides of his pants and yellow and blue shoes and a pair of white bracelets. He wears a white native indian belt-like scarf at the center of his pants and his upper body has purple tattoos on his chest and both of his shoulders resembles a band and a round shape on both of his elbows.

Galuda lives in the western wilds. He is a shaman with a tender heart and hatchet-sharp intelligence. To save his village from a mysterious disease he is on a worldwide search for Power Stones. Though he is a pacifist who abhors fighting, Galuda has sworn revenge on the "one-handed man" who brought sickness to his people.

In his ending, Galuda finds the Power Stone he had been seeking on his journey. He returns and cures his village of a mysterious disease, most importantly the chief's daughter, whom he marries. A giant statue of Galuda is erected in his honor, which is then shown impressing tourists in current times.

Galuda was just happily married to the chief's daughter in their village, and they are on their honeymoon. On their comfortable trip in the airship Royal Heaven, Galuda's wife looks out of the window.

"What is that castle?" At that moment, the airship is shaken hard and they are thrown out through a window. Galuda loses consciousness.

"Where is this?" When Galuda wakes up, he finds himself in the castle. He must find and save his wife!

Galuda is one of the more powerful characters and has decent speed to get around, unlike Gunrock. His offensive and defensive abilities are high, and he doesn't have any major weaknesses. The key with Galuda is to get in close to the enemy, but he is also a very well-rounded character good at just about everything. His right trigger Power Fusion is hard to aim, but is very damaging when done correctly. In the first Power Stone, his Light of Judgment was also hard to aim. It was removed in Power Stone 2. In Power Stone Collection, he unlocks the Totem Hammer.

Originating from Soil Land, Galuda was part of a tribe called the Soaring Eagles and had a sister. Lilica, the chief's daughter, was engaged to be married to Galuda, but due to an illness she got when they left their village, the wedding was postponed. When Falcon and his crew arrives at Soil Land, they find out that the civilians of Dust Town and Galuda's Tribe were not on good terms with each other. Falcon and his crew eventually get separated, resulting in some of his friends being captured and locked by the town's police. It is later on revealed that the townspeople hold a stone called the Soil Stone which originally belonged to the indigenous people of Soil Land.

According to Galuda, the Soil Stone was found at the top of the totem pole in his tribe's original homeland, which was taken over by settlers. Ever since the Power Stone was in that totem pole, peace and good health settled on Galuda's tribe and those who disrespected it were cursed. Falcon and Galuda decided to work together to bring it back and free his friends. In the end, the Soil Stone reacted with Galuda to Power Change into Proud Eagle in order to protect his tribe.

Soon, peace was made between the Soaring Eagle tribe and the people of Soil Town (now called Eagle Town). After these events, Galuda decides to travel with Falcon and his crew in order to find a cure for his future wife, Lilica.

In the near end of the series, Galuda was attacked by a giant scorpion who intends to steal his Soil Stone as he managed to escape it's onslaught and the Soil Stone was safe in his hands and joins with Falcon and the group to travel to Dark Land in fighting Valgas. He also leads, Ryoma, Wang-Tang and Rouge to get their Power Stones from the altar in the mouth of the inactive volcano and fights against most of Valgas' fighters who turned into monsters by controlling from the black gem at the back of their necks.

He and the others cornered Valgas in his Power Change form and demontrates the power of the Dark Stone and mutates into blob monster. They are unable to stop them when they were hit from Valgas' electric shock and reverts back to their normal forms and he then watches Falcon defeats Valgas as the Light Whirlwind after transforming with the Light Stone.

At the end of the series, Galuda returns to Soil Land, where he and Lilica finally get married. 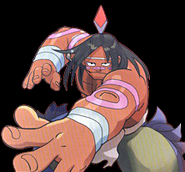 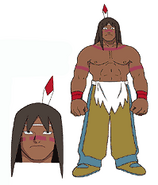 Anime concept
Add a photo to this gallery
Retrieved from "https://capcom.fandom.com/wiki/Galuda?oldid=137815"
Community content is available under CC-BY-SA unless otherwise noted.