Capcom Database
Register
Don't have an account?
Sign In
Advertisement
in: Games, Board Games, Fantasy Games,
and 5 more

Gaia Master (ガイアマスター) is a fantasy board game developed by Capcom and released only in Japan. The original version, Gaia Master: Kamigami no Board Game (ガイアマスター ~神々のボードゲーム~, roughly "Gaia Master: Board Game of the Gods"), was released on the original PlayStation console on April 20, 2000.

As a willing participant in the game, a player chooses a hero from eight different characters including Jiggar the Treasure Hunter, who hunts for gems or Princess Tiara, she of the privileged class whose luck factor in the game awards her with bonus parcels of land.

Upon the throw of the dice, a player moves the allotted spaces on an expansive board broken up into squares. Landing on a property square opens up the option of purchasing it. Essentially, the player is joining the landlord class and may eventually build stores on his/her plots of land which doubles the rent other players have to pay if they land on it. Hoarding adjacent properties eventually helps to build up a mini-fiefdom which exacts payment from hapless opponents to build up the player's treasury.

Battles and events are also triggered when players land on certain squares, or when cards are thrown to ignite a fight. The game uses Zenny as its currency and the item also pays the rent. At the end of the day, the player with the most Zenny wins.

Every one hundred years, a gnome known as Gaia Master and his floating kingdom appear in the sky. This entity regards man as mere pawns to be used in a board game akin to Parker Brothers' Monopoly. Apparently, medieval monopoly machinations make for much mirth.

The game has seven stages in total: 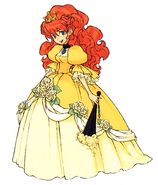 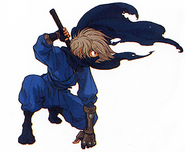 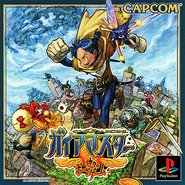 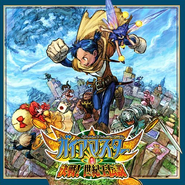