A G-Creature is the failed product of a G-Mutant. A G-Mutant is a animal directly infected with the G-Virus. The G-Mutant is capable of implanting embryos into a host. If the host is not a genetic match, the embryo is rejected, ripping its way through its host and creating a G-Creature. The G-Creature quickly grows into its G-Imago or Adult stage. The G-Creature has similar abilities to a G-Mutant but isn't nearly as agile or dangerous. Successful embryos will result in another G-Mutant. 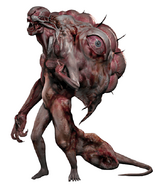 G-Larva
Add a photo to this gallery
Retrieved from "https://capcom.fandom.com/wiki/G_(Resident_Evil)?oldid=139000"
Community content is available under CC-BY-SA unless otherwise noted.