It wields a massive hammer, and its body is made of hardened lava and flame in the shape of a minotaur, as it is still haunted by the death, agony, and resentment of the damned.

As Arius boards his helicopter on the off-shore oil rig's helicopter pad, Dante arrives to stop him. Arius summons Furiataurus, and manages to escape while Dante fights the beast. However, Dante manages to slay it, and its body hardens into an inert statue. Furiataurus later appears as part of Argosax the Chaos. 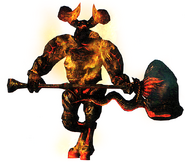 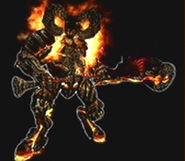 Furiataurus emerging from the ground before his battle with Dante
Add a photo to this gallery
Retrieved from "https://capcom.fandom.com/wiki/Furiataurus?oldid=130800"
Community content is available under CC-BY-SA unless otherwise noted.