A renowned and honorable Spanish matador who is an expert fencer and fights with a Plasma Rapier while valuing honor from within the fights that he participates in. Unlike most members of the Fourth Empire, Gerelt is an unwilling and reluctant ally of Bilstein.

Seeing the strong potential that Gerelt had due to his fighting abilities, Bilstein kidnapped Gerelt's wife and daughter with the help of a rival matador who had envied Gerelt's popularity and skill. Through framing Gerelt for committing crimes of conspiracy and leaking government confidential information to foreign powers against Spain by bribing various officials and planting the documents in his hotel room after a matador demonstration, Gerelt was cornered by the authorities and his rival had made his opportunity to capture his wife and daughter in the distraction made. Upon landing into prison, Bilstein then cornered him and made his offer, and put up a measure of blackmail as he threatened to kill Gerelt's wife and daughter unless Gerelt followed his direct command. To ensure that he also had Gerelt's willingness, Bilstein had implanted a bomb in his chest, forcing Gerelt to commit horrible crimes against mankind, for if he refuses, the bomb would be triggered and go off. All that Gerelt wants is to be free and save his family.

He has an old friend named Claire, who is completely loyal to the Fourth Empire and was entrusted by Bilstein with the trigger which remotes to the bomb inside Gerelt, due to fact that Bilstein still alive one year later after his first defeat and begin an intergalactic war between the Fourth Empire and Star Gladiators. However, Claire sacrifices her life for his freedom and his family’s sake. He is finally convinced by his family that everyone will forgive him, with the first person to do so is one of the Gladiators’ members, Gantetsu. 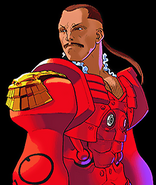