Fou-Lu is a character from the Breath of Fire series of RPG games. He is one of the playable main characters of Breath of Fire IV and is sometimes acccompanied by one of his two animated Chinese guardian lion statues Won-qu. While Fou-Lu is initially a playable character in a few segments, he ends up becoming the game's main antagonist by the end.

Fou-Lu is an Endless (a race of immortal powerful creatures), improperly summoned to the world by the Fou Empire, and is the other half of Ryu. Due to this, both share similar (although polar opposite) abilities and strengths.

When he was summoned to the world, the summoning ritual was incomplete, so the soul of Fou-Lu was parted in two. The other part arrived in the world six-hundred years later than his alter-ego. Once Fou-Lu founded the Fou Empire, he fell into a deep slumber, awaiting Ryu.

Fou-Lu can be described as a tragic villain. Initially, he is a very cold yet fair person who values a peaceful and prosperous empire, as per his "promise" that was not upheld. He is patient with humanity, despite the empire hunting him down, until the woman he grew close to, Mami, was destroyed to try and kill him with the Carronade, which led him to anger.

Interestingly, in the theme of duality between Ryu and Fou-Lu, Ryu also has a moment of anger around the same time after Rasso mocks the killing of the people of Chek. Nina was able to help him maintain his sanity.

Fou-Lu is only playable in a few segments in the game, in which the player only controls him. For practical purposes, he's essentially Ryu starting out with all of his dragon forms, but his abilities are more offensive based (such as an instant death spell), and as he travels and battles alone, he has no need for support abilities.

Though Fou-Lu is used on his own, the parts where the player controls him are considered quite simple because Fou-Lu starts off at an extremely high level (though there are instances where he can be KO-ed, so caution must be exercised regardless). Fou-Lu has an affinity for water, so fire-based attacks are his bane.

The God Emperor whose incomplete summoning caused his power to be split in two, Fou-Lu is the other half of Ryu. He built the Fou Empire during his time but due to the excessive use of magic and incompleteness, fell into a deep sleep with the promise made by him and the humans that on his revival, he will assume once again as the emperor of the empire. After some time, when Ryu was born, Fou-Lou awoke and ordered Won-qu to guard his tomb and walked out of his tomb into the forest. Fou-Lu then encountered two soldiers who boasted about the Fou Empire being able to crush even dragons, Fou-Lu summoned the Astral Dragon and said with a sadistic grin "They art but gods" and had the two soldiers killed.

In the forest, Fou-Lu encountered General Yohm, a powerful sorcerer who serves the current Emperor. He greets Fou-Lu by summoning a powerful flame monster that the newly awakened god defeats. Yohm then orders his troops to light the forest on fire and corners Fou-Lu on a bridge, revealing that the current Emperor would prefer that he sleep for eternity and sends him falling to his doom.

Fou-Lu is shown to have survived and is in Bunyan's care. He then heads down the mountain and is cornered by Yohm again, who summons another monster to fight him. Fou-Lu dispatches it, but is exhausted due to being incomplete, and then transforms into Astral Dragon and flees, being chased by several more of the monsters. After a long chase and with little strength left in him, Fou-Lu is injured further and crashes into the forests to his doom.

Fou-Lu then awakens in a farming village under the care of a simple and kind woman named Mami. Fou-Lu hears from a man about a "God" who has being threatening the village, and leaves to investigate and finds that it is merely a Rock Golem who has absorbed the essence of a "God" who was in the area.

Upon returning to the village, he finds the village to be under attack by Empire soldiers and escapes with the Mami's help. He arrives at a area that is then immediately hexed the moment he steps into it. Despite the immense damage it causes and the fact he took the blast at the point of its impact, Fou-Lu merely falls unconscious. He also realizes, before blacking out, that Mami's life was used to fire the Carronade at him, resulting in his growing hatred for humanity.

The next time Fou-Lu is seen, he has arrived in the capital. He then forces his way into the Imperial Castle. Inside he encounters A-tur, his second servant, who proclaims the emperors who succeeded Fou-Lu did not keep the promise. Proceeding into the castle he encounters Yohm. The old summoner calls on Kahbo and Khamyu, stronger versions of the creatures he had previously used. Fou-Lu effortlessly disposes of them. Yohm declares he knew the risks of his mission, saying that although mortals are not as powerful or live as long as the Endless, the value of their lives is in how they die. Yohm then proceeds to commit suicide by fire. After reaching the inner sanctum, Fou-Lu meets with Yuna, who plans to seal Fou-Lu's powers. He then calls forth elite guards and diviners to cast a magical net over the area, rendering them invincible so they can weaken the First Emperor. However, the power of the dragons easily breaks the barrier and the troops are wiped out. Yuna flees after witnessing this event.

In the throne room he meets the 13th Emperor, Fou Soniel. Soniel attempts to kill the First Emperor using the Dragonslayer, but Fou-Lu is unaffected, and instantly beheads the traitor. He takes his place at the throne and awaits his missing half.

Ryu and his companions meet with Fou-Lu who reveals that he plans to merge with Ryu and wipe out humanity for all the evil they have done and Ryu and Fou-Lu fight on the roof of the castles.

After Ryu and Fou-Lu fight for the first time, Fou-Lu then asks Ryu questions and the player must choose which is the answer he or she desires to get the good or bad ending.

To answer "I don't know..." continues the questions and eventually leads to fighting Fou-Lu with Ryu and the party.

Ryu and the party fight Tyrant and then the Astral Dragon, defeating them both.

Fou-Lu then realizes that humans are not as bad as he first thought and merges with Ryu to become the complete Yorae Dragon God. With the remaining dragon gods of the world deciding to now leave life in humanity's hands, they remove their presence from the planet. With Ryu's godhood now gone, he rejoins the group as a mortal and they leave the palace together to return home.

If the player selects "Maybe so..." , Fou-Lu absorbs Ryu and effectively eliminates his existence.

Fou-Lu summons the Infinity Dragon and fights the other party members. The player can choose to effortlessly defeat the party or allow Nina, Cray, Scias and Ursula to kill the dragon and get a standard Game Over. After annihilating the party, Fou-Lu then moves to eradicate humanity, resulting in the bad ending. 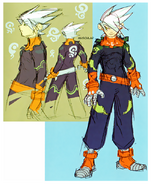 Retrieved from "https://capcom.fandom.com/wiki/Fou-Lu?oldid=121623"
Community content is available under CC-BY-SA unless otherwise noted.