Forest Speyer is a character from the Resident Evil survival horror games. He is a member of S.T.A.R.S..

Forest is in charge of vehicle and weapons maintenance. He is described as being a perfectionist, and well-regarded by his teammates due to his professionalism. He also has a close friendship and rivalry with Alpha Team member Chris Redfield, as they are both professional marksmen.

On July 23, 1998, Bravo team was sent into the Arklay Mountains to investigate the disappearances and brutal murders of hikers. Their helicopter experienced engine failure and crashed into the forest. The R.P.D. pilot, Kevin Dooley stayed behind to find the cause of the failure.

While Rebecca Chambers and Edward Dewey searched the Raccoon forest, the rest of Bravo Team - Forest included - found an abandoned Spencer Mansion. The team split up to check the area and report back with their findings. Unbeknownst to them, Kevin and Edward were already dead, and Rebecca was unable to reach them for another day.

Whilst checking the second floor East terrace, Forest was attacked and pecked by a murder of crows. He was rendered infected and unconscious following the attack, and awoke as a Zombie when found by his S.T.A.R.S. comrades, who put him to rest.

In Resident Evil: Director's Cut, a scene was added in the "Arrange" mode in which Forest revives and attacks the player. This zombie version was brought back in the 2002 remake of the game, as well as in Resident Evil: Deadly Silence, an enhanced Nintendo DS port (also, Zombie Forest is a boss in the game's unlockable "Masters of Knifing" minigame).

An additional game mode can be also be unlocked in the GameCube remake in which the zombified Forest, wearing a bandoleer of grenades, appears randomly in certain rooms. Attacking him with any weapon, including the knife, will result in a massive explosion, killing Forest and the player instantly. He also makes an appearance in Resident Evil: The Umbrella Chronicles. He revives on the balcony, just as he did in the other versions. When he is defeated, Chris states that he will miss their target practice sessions together.

On the East Balcony of Spencer Mansion (original) 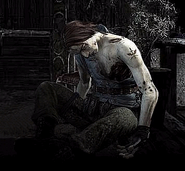 On the East Balcony of Spencer Mansion (remake) 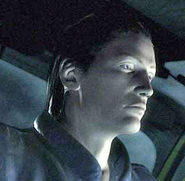