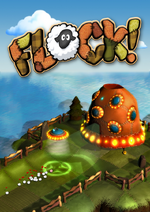 The player controls a UFO ("The Flocker") and is tasked with herding animals (sheep, cows, chickens, and pigs) back to the mothership, "The Mother Flocker". This is challenging due to the hazardous environments the animals exist in -- the players must defend their flock against hungry predators, avoid pits of death, and occasionally send their animals flying with catapults. There are 55 single-player levels that span across three seasons: summer, autumn, and winter. There is also a cooperative play mode. 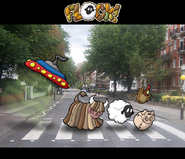 Soundtrack
Add a photo to this gallery

Blanka in Flock HD
Blanka's cameo in Flock!
Add a photo to this gallery

Retrieved from "https://capcom.fandom.com/wiki/Flock!?oldid=139865"
Community content is available under CC-BY-SA unless otherwise noted.