Flame Mammoth or (Burnin' Noumander in Japanese) is a character and a boss from the Mega Man X series of action platformer games. He is an Elephas namadicus-based Maverick debuting in Mega Man X. There was strong animosity between Flame Mammoth and Chill Penguin.

During the battle, Flame Mammoth has a room with a conveyor belt and can spit oil at X. Mammoth can also shoot fire from his arm cannon. The only way to get rid of it is to use an uncharged Storm Tornado at the flame. If it hits the oil, it turns into a Fire Wave. To stop him from spitting Oil, X has to use Boomerang Cutter to cut his trunk, unlike cutting the tentacles of Launch Octopus. Later, Mammoth will trumpet to make the conveyor belt move. Mammoth can also jump in the arena to stun X. Mammoth's attacks are combined with Guts Man and Flame Man and then he repeats the process.

Flame Mammoth behaves like the one in his first appearance, except his fireballs fall into the arena, causing heavy damage to a character, unlike touching him.

Flame Mammoth lastly appears in the remake, and he is voiced by Gerald Matthews. He behaves like the one in his first appearance. 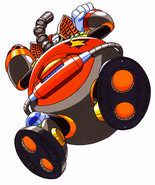 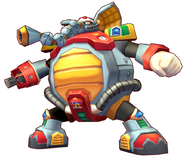 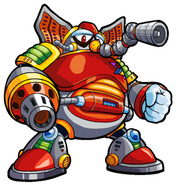 Street Fighter × All Capcom
Add a photo to this gallery
Retrieved from "https://capcom.fandom.com/wiki/Flame_Mammoth?oldid=131129"
Community content is available under CC-BY-SA unless otherwise noted.