Fire Man (ファイアーマン Faiaman) is a character from the Mega Man series. He is one of the Robot Master bosses from the original Mega Man game.

Fire Man was created by Dr. Light for waste disposal. He can produce and manage flames as hot as 8000 degrees Celsius with ease. In Dr. Wily's first scheme for world domination, he stole and reprogrammed Fire Man to be a battle robot.

Fire Man's main attack is the Fire Storm. With it, he can fire off powerful bursts of flame. As a playable character in Mega Man Powered Up, he can also create flame columns. Fire Man has not always been on Dr. Wily's side, though. In Super Adventure Rockman he supports Mega Man's quest, and in Powered Up he can be rescued and played as a protagonist.

Fire Man is said to have a personality as fiery as his abilities. While he's very passionate, he's also very quick to temper. As well, because of their clash in elements and personalities, Fire Man doesn't get along well with Ice Man. Fire Man likes camping, and dislikes rainy days.

"Fire Man uses his flames to burn away the world's waste, which is piling up on a daily basis. He is in charge of the worker robots who take care of the more simple tasks at the waste management facility, and he also performs many of the waste management duties himself. Fire Man's Fire Storm burns at 7000 to 8000 degrees celsius, and it is capable of burning through just about anything. His body is covered with a fireproof material, and his internal components are also heat resistant. The metal components of Fire Man's body are used to launch his flames. His personality is better described as a quietly burning flame, rather than a chaotic and rampant wildfire." 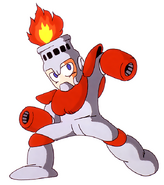 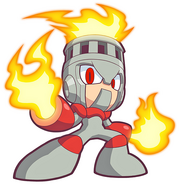 Street Fighter × All Capcom
Add a photo to this gallery
Retrieved from "https://capcom.fandom.com/wiki/Fire_Man?oldid=121593"
Community content is available under CC-BY-SA unless otherwise noted.