Fire Leo is a character and boss antagonist from the Viewtiful Joe series.

"Joe's toughest opponent is none other than a rampaging bundle of flame known as Fire Leo. Unlike Alastor, Fire Leo loves the lava pool in his abode, and takes regular dips in it to recharge his fiery persona.

Fire Leo keeps his enemies at bay by tossing a steady stream of flaming meteorites around, and by breathing giant walls of flame. Should Joe manage to fight fire with fire and land a damaging blow, Fire Leo will quickly change his ways---for a moment. Joe must remain on his toes if he's to stay ahead in this battle of heavyweights!"

In the anime, he is the strongest member of Jadow, codenamed "Inferno Lord." He was sent to fight Joe after the incompentence of the other agents. He developed a grudge for Joe after being referred to as a dog when he is clearly a lion, and his fiery mane was extinguished in his first defeat by Joe. He's one of the few Jadow members to question Alastor's loyalties.

When Joe arrived to Jadow HQ, Fire Leo wanted to kill Joe and overpowered him. At the last second, Fire Leo was restrained by Alastor as they fell into the void that surrounds Jadow headquarters. He is later found to have been brought to a land of snow ruled by an ice princess, whom he falls in love with and acts as her knight. He confronts his brother, Frost Tiger, and they reach a stalemate. After the battle, Fire Leo decides to stay with the ice princess and protect her. 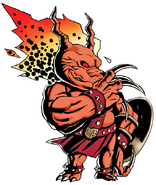 Fire Leo in Viewtiful Joe.
Add a photo to this gallery
Retrieved from "https://capcom.fandom.com/wiki/Fire_Leo?oldid=129354"
Community content is available under CC-BY-SA unless otherwise noted.