Final Fight 3, known in Japan as Final Fight Tough (ファイナルファイトタフ, Fainaru Faito Tafu?), produced by Tokuro Fujiwara, is the fifth game in the Final Fight series. Like Final Fight 2, Final Fight 3 was exclusively for the Super Nintendo Entertainment System (SNES) in 1995, and was not released in arcades. This game introduces two new characters; Dean and Lucia Morgan. In Japan, the game was released in December 2009 on the Wii's Virtual Console. Characters designs were handled by Bengus.

The game can be played by up to two players simultaneously, with each player controlling a different character. Before the game begins, the player chooses between the four main characters; Mike Haggar, Guy, Lucia and Dean.

Each has his or her own fighting style and attributes. Lucia is the weakest but has faster attacks, Haggar is the strongest but also the slowest, with Guy and Dean being more balanced - Guy slightly faster but weaker than Dean.

The controls consists of the d-pad and two buttons for attacking and jumping. The player character can move in any of the eight directions, but can only face and attack to the left or right like in most beat-'em-ups. Pressing both buttons simultaneously performs a special move that attacks in both directions, though uses a little health. Players can also grab and throw opponents, as well as use various weapons.

New innovations in the series include the option to have the computer AI control the second player, and the introduction of command-input "special moves" like in the Street Fighter series. Another addition is the introduction of a Super Gauge like in Super Street Fighter II Turbo, which fills as the player strikes enemies and, when full, allows the player to unleash a devastating Super Move. Also, the player can run and backdash, with character-specific special running attacks possible while running. Furthermore, the game introduces weapon specializations - each character has a weapon they're most proficient in and when they have it, they are able to use a special weapon attack in addition to the regular variation that the other characters can do when holding that weapon. Finally, the game introduced hidden areas, branching game paths and multiple endings.

Following the Mad Gear Gang's defeat in Final Fight 2, a gang war erupted in Metro City with the Skull Cross Gang eventually reigning supreme. Guy returns to Metro City following his training and meets with Mayor Haggar. The Skull Cross Gang then detonates a bomb and incites a riot in downtown Metro City, freeing their leader Marshal Black, from prison. Joined by female police officer Lucia Morgan and a mysterious street fighter named Dean, Guy and Haggar fight to take down the new gang of criminals. On the rooftop of the Skull Cross Gang's headquarters, the quartet managed to defeat and kill Black by hitting him through the electric generator, ending their crimes.

Final Fight 3 consists of six stages or "rounds", as well as two bonus rounds. Each round takes place in a different locality in Metro City, with most rounds featuring more than one level. At the end of each round the player will face a boss character unique to that round.

The game possesses a branching path system wherein the player will take a different route through the game depending on the fulfillment of certain criteria - entire boss battles can be skipped by taking alternate exits and most significantly, Round 4 will take place in one of two different locations (with different bosses) depending on whether the player took the bus in Round 3 or not.

Unlike the series' previous entries, the game lacks a credits sequence for the game's staff.

Aside from interviews with Capcom staff, there is only one known credit for the game: music composer Katsunari Kitajima, as revealed on his official website. 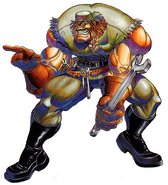