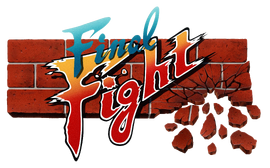 Final Fight is a series of beat 'em up games developed and published by Capcom. The series focus on a group of heroic vigilantes who must save the fictional Metro City from the control and various threats of criminal gangs, primarily the Mad Gear Gang. Several of the Final Fight characters have gone on to appear playable or make cameo appearance in the Street Fighter series of fighting games, as both series are set in the same universe. The Final Fight series also has ties to the Slam Masters wrestling games and the science fiction beat 'em up game Captain Commando.

As of 2009, there have been six original games in the series. Final Fight One was a remake of the first game, Final Fight Guy was a slightly altered version, and Final Fight: Double Impact is a downloadable game packaged with Magic Sword. In January 2009, UDON announced they had acquired the rights to produce Final Fight comic books. The total sales of the Final Fight series have totaled 3.4 million units.[1]

Capcom producer Yoshinori Ono has expressed interest in seeing a new title in the future.[2]

Final Fight: Streetwise
Add a photo to this gallery

Retrieved from "https://capcom.fandom.com/wiki/Final_Fight_(series)?oldid=141429"
Community content is available under CC-BY-SA unless otherwise noted.