The Felyne and Melynx are fictional cat-like creatures from the Monster Hunter action role-playing games. They are both humanoid subspecies of the Lynian race. The Felynes, along with the Rathalos and the Poogies, are the series' most well-known species and all three serves as mascots for the franchise.

Felynes are recognized by their white fur and have the ability to talk in human language, and can be found both in human villages and in the wild. Melynxes are darker in color.

Felynes perform a small variety of jobs in villages, from shopkeeping to farm maintenance, but most notably they may work under a hunter as a Felyne Chef or a Felyne Comrade. Felyne Chefs cook food for their hunters to support them in their adventures by temporarily bestowing them with beneficial status effects, while Felyne Comrades accompany their hunters on quests and use various skills and attacks. They also supply an additional reward at the end of a Quest.

A Felyne will attack the hunter if a Melynx is attacked. All the Felynes in the area will join the attack.

The Felynes and Melynxs had their own spin-off game in 2010 called Monster Hunter Diary: Poka Poka Airu Village for the PSP. Felynes have made cameo appearances in other unrelated games. 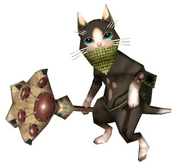 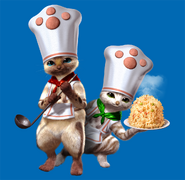 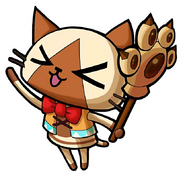 Heroes & Heralds Card of Felyne and Melynx in UMvC3.
Community content is available under CC-BY-SA unless otherwise noted.
Advertisement