Capcom Database
Register
Don't have an account?
Sign In
Advertisement
in: Articles with incomplete sections, Characters, Darkstalkers Characters,
and 5 more

Felicia (フェリシア?) is a fighting game character from the Darkstalkers series. She is a catwoman with dreams of becoming a musical star.

Felicia is a catwoman with tan skin, long thick blue hair, white fur and pink or red claws. Although her fur preserves her modesty, Felicia is fully naked and wears no clothing, making her the most revealing playable female in the Darkstalkers series. But in the animated cartoon of Darkstalkers, she wears a white bra top.

She is an energetic and optimistic catgirl who enjoys singing, dancing and making friends with people. She is also pacifistic in nature and is a strong advocate for peace between Darkstalkers and humans. She also loves children.

Felicia's design is inspired by the bakeneko (化け猫, "changed cat"), a yōkai of Japanese mythology that start their lives as normal cats but grow up to possess supernatural powers, like the ability to assume the appearance of a human being. It is also inspired by Edward Field's 1967 poem "The Curse Of The Catwoman". Felicia was originally going to be designed as a werepanther or wereleopard.

Felicia was raised by a Catholic nun named Rose. When Rose died, Felicia left her town hoping to be a musical star. During her travels, she met many other catgirls of her kind. With her newfound friends, she set out for her dream of being on stage. Eventually, she and her friends started a musical with Felicia being the main star. In the events of Darkstalkers 3, she wondered about how she could make others happy. In her ending, Felicia founded an orphanage named "Felicity House."

Felicia is very agile in combat with her techniques, being athletic and gymnastic in nature. She can roll like a ball in a manner similar to Sonic the Hedgehog and tackle her enemies. Her tail seems to be quite durable, as she can balance on it while delivering a double kick and even jab foes with it. She can also kick up sand for quick attacks, but due to the bluish color appearing in it, it is possible she can channel ki into her feet and expel it out through the kick. She has been seen tossing orange balls spontaneously that pop once they come in contact with something. She also displays, in her intro and the Darkstalkers OVA, the ability to morph in and out of a smaller housecat form.

In the Udon Comics version of Darkstalkers, Felicia is still looking for her big break into stardom; unfortunately being a catgirl proves to be a very large roadblock on the path to fame. Along the way, she runs into the werewolf, Jon Talbain who believes that humans are treacherous and vile, while she thinks that the current hatred between humans and Darkstalkers are just a few "bumps in the road." Despite the fact that his interference costs her a potential gig, Felicia asks Jon to accompany her, so that she can try to prove to him that humanity is not all bad. Eventually, they end up at the Catholic orphanage where Felicia grew up. Felicia's origins are much the same as well. One notable exception is the character of the nun who raised her. Here her foster mother is named Sister Cecillia and is still alive and active in her beloved foster daughter's life. 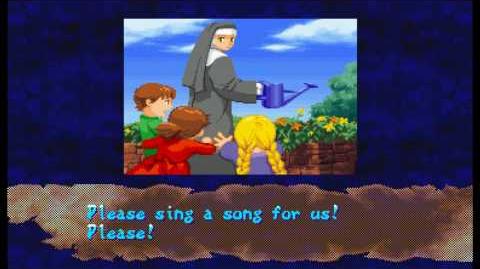