Hitenryu (fictional fighting style loosely based on Wing Chun, much like Jeet Kune Do), Kung Fu

Fei-Long is Capcom's tribute to the Wing Chun and Jeet Kune Do movie legend Bruce Lee, the basis for his design. Not only do the two look alike and come from the same city, Fei-Long also lets out similar battle cries to Lee, and is just as furious and fast. Also, Fei Long (飛龍) is Mandarin for "flying dragon", as well as a type of kick. Bruce Lee's Chinese screen name was 李 小龍 (Li Siu-Long) or "little dragon".

He was one of the early Bruce Lee inspired characters in fighting games, after Kim Dragon from World Heroes and Liu Kang from Mortal Kombat, but predating Marshall Law and his son Forest Law from the Tekken series (additionally, in Street Fighter X Tekken, some characters even mistake Marshall Law for Fei Long in their win quotes).

Other notable Bruce Lee-based characters include Li Long and Maxi from the Soul series, Jann Lee from the Dead or Alive series and Long from Xuan Dou Zhi Wang. He also bears a notable resemblance to Kenshiro from the Fist of the North Star manga and anime series.

Interestingly, compared to most other known Bruce Lee-based fighting game characters, Fei Long's story and background arguably matches Lee's the closest. There are still a few differences; Bruce Lee lived in the USA as an adult and had an American wife, whereas Fei Long has no apparent connection to the USA and is not married or not in a relationship. Also, although he is seen using them in one of his Super Street Fighter II win poses and on some of his artworks, Fei Long, unlike Bruce Lee, never actually uses the nunchuck as weapon or a special move in any of the Street Fighter games, cartoons or movies.

In Street Fighter Alpha 3, Fei Long's story plot is related to Robert Clouse's Game of Death, which included Bruce Lee (only for the finale fight scenes though). The plot is similar because they both have a syndicate trying to make the main character join them.

In his ending for Super Street Fighter II, he directly references Bruce Lee and his son Brandon Lee when he says "There can never be another legend like the great one and his son" (this reference is not present in the Japanese version). Also, Bruce Lee's statue can be seen when the students are training.

Fei Long is very serious most of the time. He is also shown to be calm at times. The best example of this is in his rival fight against Abel, where he is shown to be in a normal mood at first, but all of a sudden loses his temper just as the Frenchman asks him for a fight twice. He is full of fighting spirit and takes great pride in his fighting style, which he seeks to honor in all ways possible. He also despises all that is evil.

Fei Long also enjoys a good match; although he is a famous martial arts movie actor, he still takes his time to appear at underground fighting areas to find a worthy opponent to spar with (which can be seen in Street Fighter II: The Animated Movie). There are also times when Fei Long is shown to be a little cocky; this can be seen by many of his personal actions and also win quotes against certain characters.

A youthful and talented man from Hong Kong, Fei Long began training in Kung Fu from the age of six, eventually developing his own form, and fought on the streets to sharpen his skills until he caught the eye of a movie director, who got him into the movie business.

He can be seen within the streets of Hong Kong in Dan Hibiki's stage watching the fight.

Engaging in many street fights in search of inspiration, Fei Long attracts the attention of the criminal organization Shadaloo, which tries to recruit him by force, sending Balrog and Vega after him. After the destruction of the Psycho Drive, a film based on these events is put into production with Fei Long as the star, catapulting him into the big time and making him an international sensation.

He makes a string of action movies until he participates in the second World Warrior tournament. During the tournament, he realizes that he prefers the real thing over the staged, choreographed fight scenes in his movies, and gives up his career to disappear into the streets. Despite this, he soon returns to the world of cinema.

Fei Long returns to the world tournament stage after Shadaloo agents are suspected of attacking stage hands and co-stars in the movie he is working on. It transpires that the plot of the movie bears a dangerous resemblance to S.I.N. operations, which is what attracted their attention to the movie's cast and crew. During his journey, Fei Long encounters various fighters.

First, there is a young girl named Makoto who wants to fight Fei Long in order to build the reputation for her dojo. Fei Long, seeing great enthusiasm in the girl, agrees. He later encounters a man named Abel, who turns out to be an admirer of Fei Long and requests Fei Long to fight him, to which he also agrees. After their bout, Fei Long departs to continue his mandatory goal. Fei Long then faces and defeats the man behind the attack on his movie crew and the host of the tournament, Seth. When Fei-Long demands answers from Seth (or one of his copies), Seth replies that "sometimes the media can get too close to the truth". However, the conversation is interrupted when a kunai (a ninja throwing dagger) strikes Seth in the neck, killing him. Fei Long leaves the S.I.N building without answers.

When Fei Long returns to the set, however, he is confronted again by Abel. Abel, having heard that Fei Long plans to investigate further into S.I.N. and Shadaloo, wants to help and warn Fei Long of the danger. Fei Long replies that it's not a problem, wondering where to begin.

Fei Long makes a minor appearance in the So-Shu sequence, where he evades the set of a film he is working on in order to watch an underground fighting tournament for entertainment. There, his eyes fall on Ryu, who was forced into the ring for criticizing the earlier fighters (although this is implied to be a fib from the bouncers) and who takes out the challenger with ease. Intrigued, Fei challenges Ryu and manages to land a few good hits, but Ryu eventually gains the upper hand and breaks Fei's arm. Enraged, Fei unleashes a Shienkyaku and hits Ryu directly in the chest, but Ryu surprises the actor with a quick recovery and takes him out with a Tatsumaki Senpukyaku.

Later, while strolling with Ryu through the streets, Fei realises that Ryu is the man who beat Sagat a few years earlier, and feels more relieved about losing to him. Fei also mentions Sagat's induction into Shadaloo under M. Bison and gives Ryu a brief description about the syndicate. The two part ways as friends, with Fei implying a desire to fight Ryu again someday.

While Fei Long himself is not seen in the game, he is mentioned in passing as Pai Chan's "movie pal", who gave her information about S.I.N. and Juri.

Fei Long's fighting style is a form of kung fu derived from Bruce Lee's Jeet Kune Do; in one of his Street Fighter IV win quotes, he refers to it as Hitenryu. He has two special techniques in his debut appearance in Super Street Fighter II: the Rekkaken, a series of rushing punches, and the Shienkyaku, a jumping flame kick. This technique is also referred as the Rising Dragon Leg, due to its similarity with Ryu and Ken's Shoryuken ("Rising Dragon Fist") and its similar input command. The Rekkukyaku, a later addition in the Street Fighter II games, is a technique in which Fei Long jumps towards the opponent with a spread kick. His Super Combo is the Rekkashinken, a more powerful version of the Rekkaken.

In Street Fighter Alpha 3, he retains all of his techniques and gains two new Super Combos in A-ism mode: the Shien Renkyaku, a more powerful Shienkyaku, and the Ryuu Yassai, a Level 3 Super Combo in which he punches an opponent and then uppercuts them into the air, followed by a jump kick.

In Street Fighter IV, Fei Long retains his old Rekkaken punches and Shienkyaku whilst gaining new moves such as the Tenshin. The Rekkukyaku is changed to a flying kick, which he then branches into a front flip kick. The Tenshin is a command grab that has Fei Long hook his leg to the opponents and flips over them. This move allows him to catch the opponent off guard and set up certain combos.

He retains his Rekkashinken Super Combo from Super Street Fighter II, and gains a new Ultra Combo called the Rekkashingeki, a more powerful variant that adds a flurry of punches after the third Rekkaken, and follows up with a flying flaming kick. In Super Street Fighter IV, Fei Long gains a second Ultra Combo called the Gekirinken; Fei Long counters certain attacks by delivering a hard jump kick to the back of the opponent's leg, followed by a barrage of fast and deadly punches. He then finishes them off with the one-inch punch. 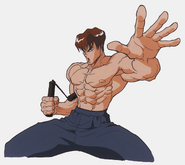 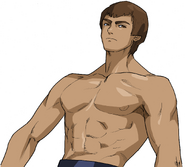 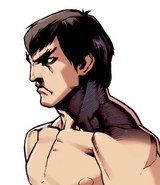 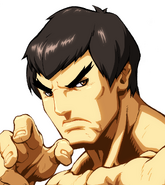 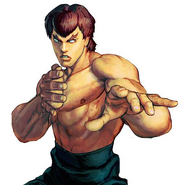 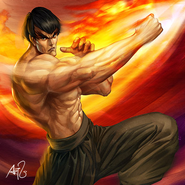