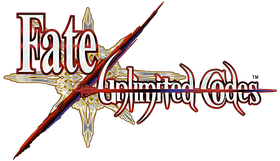 The game follows various characters known as "Servants" and "Masters" in their own respective quests to win the Holy Grail, the item that can fufill any wish.

Retrieved from "https://capcom.fandom.com/wiki/Fate/unlimited_codes?oldid=132319"
Community content is available under CC-BY-SA unless otherwise noted.