The F. Blacker (Japanese: F.ブラッカー, F. Burakkā) is a recurring mid-boss and the eventual final boss in 19XX: The War Against Destiny, the fifth game in the 194X series. It is piloted by Mark Raratto's unnamed older brother, who fights for the sinister Outer Limits organization.

The F. Blacker is a medium-sized, subsonic, twin-engined fighter plane with a distinctive black coloration that gives it its name. It features a pair of swing-wings, and its turboprop engines are enhanced by a high-output supercharger, allowing the pilot to operate at an altitude of 15,000 meters. It is also armed to the teeth with a devastating array of weapons, the most notable of which being a three-barreled multi-launcher in the rear section behind the cockpit canopy between the engine nacelles. It also has hardpoints on the underside of the wings for missiles. The aircraft is also shown to be at least two times larger than the three playable planes.

It can also dock up with a gigantic, flying-wing-type support unit named the Black Noise (Japanese: ブラックノイズ, Burakku noizu). The Black Noise is powered by six, massive jet engines, and armed with two-barreled machine gun turrets, large four-barreled revolving cannons, and rapid-fire homing missile launchers at the front. Each revolving cannon can also retract its barrels and deploy a larger one to fire a wide, deadly spray of high-caliber projectiles.

When the wings are destroyed, the central module will jettison, and it is just as dangerous. In addition to high-caliber, omnidirectional machine cannons and homing missiles, the central component of the Black Noise also has the extremely powerful "Maelstrom Laser" (Japanese: メールシュトロームレーザー, Mērushutorōmurēzā), which fires a destructive, tornado-like laser beam that can suck in a target while destroying it. It is also capable of ultra-high altitude flight.

The F. Blacker first appears in the game with two other enemy planes in a brief cutscene at the beginning, where they shoot down the player's transport, as he (and/or George Hamill, played by a second player) escape in the plane(s) of his or their choice.

The F. Blacker appears as the second mid-boss of the level, right before the boss battle against the Raimei. It is assisted by several Messerschmitt Me 262 jet fighters that come in from either side of the screen while the F. Blacker is firing at the player as it went from side to side.

Again, in this level, F. Blacker appears as the second mid-boss, this time a little tougher to beat. The player(s) fight him and a contingent of enemy helicopters. The battle would be brief, as it would lead into the cavern where the third boss is waiting.

F. Blacker appears again, tougher than before, and again, as a mid-boss.

Right around the beginning, F. Blacker appears with a force of rocket planes.

He appears again, as tough to defeat as ever, and considering that it's the penultimate level of the game, it's not surprising that he won't be as easy as the other times where he is fought.

The player fights him for the final time after defeating a modified version of the Ayako Special, where he tries to stop the player from destroying the Doomsday Weapon, before he then docks up with the Black Noise. 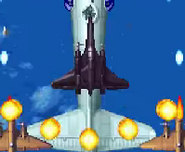 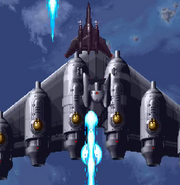 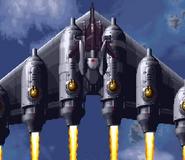 Black Noise's central component
Add a photo to this gallery

The F. Blacker on the back cover of the 19XX Secret File

F. Blacker concept art in the 19XX Secret File
Add a photo to this gallery

Retrieved from "https://capcom.fandom.com/wiki/F._Blacker?oldid=128418"
Community content is available under CC-BY-SA unless otherwise noted.