Evil Ryu, (殺意の波動に目覚めたリュウ, Satsui no Hadō ni Mezameta Ryū, "Ryu who has Awakened to the Surge of Killing Intent", Satsui Ryu in short), or Dark Ryu in the UDON comics, is an evil version of Ryu appearing in the various Street Fighter games beginning with Street Fighter Alpha 2.

He was originally introduced in the 1996 Street Fighter Zero manga series authored by Masahiko Nakahira, and later adapted in the Street Fighter canon storyline by Capcom. He is the version of Ryu should he succumb to the Satsui no Hadou to his fullest extent and uses the Ansatsuken art as it was originally used for, and depicts Ryu's struggle to resist the urge in battle. Gameplay-wise, Evil Ryu has more powerful attacks than the original, strikes faster and possesses some of the attacks of Akuma (such as the Shun Goku Satsu).

The only time Ryu fully gave in to the Satsui no Hadou to the point of becoming Evil Ryu in the storyline was at the end of the first World Warrior tournament. According to the Street Fighter Alpha series, Sagat, the defending champion, matched Ryu in battle, and then extended his hand to help Ryu up after thinking that he had won. Ryu was so consumed with the desire to win that he unwillingly gave into the Satsui no Hadou to his fullest extent ("Evil Intent" or Dark Hadou in the American version) and executed a Metsu Shoryuken, scarring Sagat's chest and his pride with rage, defeating him with ease.

Evil Ryu has occasionally appeared in many Capcom games, featuring Ryu, besides Alpha. Nevertheless, Evil Ryu does not exist as a separate character and is a darker version of Ryu in the main series (this form of Ryu has its own page only for cross-reference purposes). Despite the temptation from the negative aspects of the Satsui no Hadou, canonically, Ryu rejected the Satsui no Hadou from taking away his humanity like Akuma, and has made mass innovations to Gouken's style which helped him bring his personal style up to par with Evil Ryu from the his battle with Sagat by Street Fighter III.

Evil Ryu appears as a playable character in the Arcade Edition version of Super Street Fighter IV. Alongside gaining new attacks, his design has been updated, now sporting a red demonic aura of ki, a torn black gi, red eyes that glow bright, torn fighting gloves and a torn headband, and is far more powerful then the one in Alpha, flared up hair and a gaping hole in his chest that bursts with flares. This hole may be a reference to the wound Ryu receives in the non-canon Street Fighter III manga by Masahiko Nakahira. In his alternate costume, he is given much longer hair, giving him a more demonic appearance.

Evil Ryu's beliefs are just like Akuma's who wants nothing more but to kill and die in a fight against a worthy opponent who is strong enough to battle him, his personality is very dark, brutal, harsh, uncompassionate, and immoral, going so far as to call himself a demon and calling his power pure evil. Evil Ryu throws away his respectful ways as a warrior as well as a person and his own humanity for power, he enjoys fighting the strong and truly hates weakness from all of humanity such as love, family, justice, friendship and vengeance. He also becomes very brutal towards people, such as women, and children, especially to those that oppose him. Evil Ryu is much darker then Akuma, to the point of being completely cold-blooded, as he is shown to be very smart as well, but is also extremely close-minded to others.

Evil Ryu appears as the second and final opponent of the Asura's Wrath extra non-canon DLC episode "Lost Episode 1: Finally Someone Angrier Than Me", and is referred to as "Hatred Incarnate". After the titular character uppercuts him into the moon and attempts to drive him through the chest with his fist, the Satsui no Hadou awakens, causing Ryu to transform into a demonic being. The previous SSFIV combat style used in the first part of the episode switches to the traditional one used for the game. Evil Ryu retains all of his moves from SSFIV, but they have been significantly enhanced for the style of this game (i.e. larger Gohadoukens) and his Metsu Shoryuken is much stronger than most boss attacks in the game. The battle ends when both Asura and Evil Ryu attempt the Raging Demon on one another and it ends up in a draw, exhausting Ryu's darkness and returning him to normal. 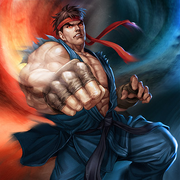