Capcom Database
Register
Don't have an account?
Sign In
Advertisement
in: Characters, Devil May Cry Characters, Female Characters,
and 3 more

Eva is a character from the Devil May Cry series. She is the late human wife of the demon knight Sparda, the mother of Dante and Vergil, and the paternal grandmother of Nero. Despite her importance as a factor to the paths her children take in life, little is known about Eva. She appears as a photo on Dante's desk and as a voice in the first Devil May Cry game, and she later makes her physical debut in Devil May Cry 5, albeit only in a flashback Dante is having.

In her portrait found on Dante's desk, Eva has fairly long, straight flaxen hair, dark colored eyes, and a very fair complexion. She wore her bangs short and swooping off to the right side of her face. Despite having lightly colored hair, her eyebrows were noticeably darker than the rest of her hair. She was complimented as being "very pretty" by Patty Lowell in the anime series. Eva's attire was fairly simple. She wore a black turtle neck dress and draped a red shawl over her arms. She also wore black opera gloves.

In Devil May Cry 5, Eva's appearance had been modernized with the more realistic style of the game. Her hair is still fairly long, however it now has a more noticeable waving texture to it. The front of her hair is cut shorter and rests just at collar bone length. Her bangs are also no longer swooping over her forehead but are now the same length as the front of her hair. She also now has a cleft in her chin.

Her attire also received some changes. Her black turtle neck dress has intricate gold patterns decorating the front torso half of the dress and also the ends of it. There are also now slits in her dress, revealing some of her décolletage, midriff, and her left leg. She also wears a pair of simple black stilettos and a black leather belt. Despite the changes made to her clothing, her red shawl remained intact. Eva's makeup was kept fairly simple in all of her alliterations. She wore rouge lipstick, trace amounts of eyeliner, and kept her nails painted red.

Throughout Devil May Cry, Dante talks about his mother and what kind of person she was when she was still alive, especially in comparison to Trish. Dante expressed that she had a fire within her that Trish could never replicate despite looking like her. And, in another line of dialogue, Dante in his despair over Trish sacrificing herself to protect him from Mundus exclaims that Eva too sacrificed her life in order to protect him.

Eva often told Dante that his father was a man who had courage and a righteous heart. Despite Sparda shortly disappearing prior to the twins' birthday, Eva remained ever loyal and faithful to him, speaking only about Sparda positively when talking to her children about him.

During Devil May Cry 5, V expressed some sorrow in response to seeing the Sparda manor and the rocking horse he often found himself alone. He believed his mother favored Dante over Vergil, which is why Dante was saved by her during the demon attack and not himself, when in fact, after securing Dante's safety Eva ran back through the house calling out Vergil's name and died looking for him. Eva loved both of her children equally, regardless.

For Dante and Vergil's 8th birthday, she gave each of the boys one half of Sparda's Perfect Amulet. Afterwards, she was killed in a demon attack ordered by Mundus. She hid Dante underneath two stones and told him never to come out, no matter what. She gave her life for her sons. It is unclear where Vergil was at this time. Eva's death is most likely the event that shaped the paths Dante and Vergil took, causing Dante to fight demons and Vergil to search for Force Edge.

After Dante grew to adulthood, Trish was made by Mundus to look like Eva in order to manipulate Dante. Dante's lingering feelings for Eva are most clearly seen when Trish is saved by Dante despite her already betraying him.

Unlike her classic counterpart, the Eva of Ninja Theory's reimagining game has wavy red hair instead of straight blonde hair and rather than wearing a majestic gothic dress, she is usually depicted wearing a simple white sundress.

In DmC, Eva is an angel who fell in love with the demon Sparda bearing him twin Nephilim (hybrid offspring of angels and demons) that they named Dante and Vergil. For the crime of miscegenation between the two races, Sparda and Eva became pariahs and were forced to go into hiding from the forces of the demon king, Mundus. While they were still young, Eva gave each of her children a unique pendant, red for Dante and blue for Vergil. Sparda and Eva raised their happy family at their mansion of Paradise, but their days together ended when Mundus's hunters located them, and Mundus himself stormed their mansion. As Eva ran through the house alerting Sparda and her children, Mundus captured her and ripped out her heart, right before Dante's eyes. Sparda went on the run with his children and erased their memories of their childhood in order to conceal them, including those of their mother's death.

Many years later, Dante begins to assist Vergil in taking down Mundus's empire, and Dante manages to recover memories of his past by finding mementos of his parents, including two blue roses left behind by Eva that match the one in her portrait. As he finds the mementos, Dante is able to remove the bonds placed on his soul and awaken his Nephilim abilities, while also catching glimpses of a message left within his soul by his mother. When he destroys the final bond on his soul, he is able to hear Eva's message clearly—an apology for not being able to protect him, and explaining that although she and Sparda never regretted their love, they regretted never giving Dante a choice to control his life. As she reminds Dante that she loves him, she encourages him to use his newfound Devil Trigger ability to choose his own path.

Eva appears in the DLC episode "Vergil's Downfall". In hell she is about to get killed by a Imprisoner demon when Vergil appears and slays it. Just as Eva expresses relief at being saved, she is shocked when Vergil presents the pendant of "Dante" (unaware that it was not the real Dante) and claims to have killed his brother. Vergil blames Eva for loving Dante more then him but Eva states that she always loved both her sons equally. Vergil coldly ignores her and goes away, leaving her crying for him.

Eva appears in TEPPEN with its "The Devils Awaken" expansion. She is featured in one unit card and her appearance is based on her Devil May Cry 5 iteration.

In "The Force Seekers" expansion, a Bangle of Time card was added which mentions Eva in its flavor text, it states that the bangle is a memento of Eva. Another card of hers was added with the "A Dark Agenda" expansion, this one is a recreation of the flashback scene in Devil May Cry 5 where she saves Dante. 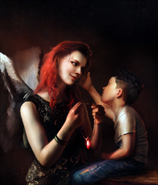 Eva's counterpart (with a younger Dante) in DmC: Devil May Cry.