Ershin (which generally translates to "Master" from the language of the Fou Empire) is the name of the mysterious armor that acts somewhat like a living person, but speaks strangely (mentioning itself in third person). The armor contains the entrapped spirit of recurring Breath of Fire character Deis who, just like Ryu and Fou-Lu, is also a victim of an incomplete summoning.

Ershin was the one to help Ryu and Nina to cross the toxic section of Chamba when they were being hunted by Imperial Troops. Deis was the one to help Ryu summon all the Gods in the Yorae Shrine to ask for power. Throughout the game, Ershin usually laughs in an incorrect timing and Deis is the one to give advice to Ryu and sometimes gives commentaries that are logical but embarrassing (specially to Nina). Deis is later released from the armor by Ryu when he enters her mind and breaks the bonds holding her there. Through necessity however, she later returns to the armor to assist Ryu.

Ershin has a personality that could be described as quite strange. Prone to bursts of laughter at inappropriate moments, and, speaking in third person, using lines like, "We should be ready when we reach the capitol, says Ershin," referring to the Endless spirit trapped inside the armor.

When the player first recruits Ershin in the party, it is not obvious where its talents lie.

At first, the player may have no choice but to develop Ershin's parameters in hit points, strength, and defense because its intelligence is too low, its agility is just slightly better than Cray's (the slowest character) and it is limited to physical skills, not learning anything else with further level ups, limiting it to rely mainly on its physical attacks and extra skills learned from Masters and monsters.

However, once the player reaches a certain event in the game, Ershin's defense, intelligence, and HP skyrocket, making it one of the most powerful characters in the game. Ershin is also the only character in the party who requires a blacksmith to create specialized armor just for it, so its equipment options are limited early on until the player collects scrap items. Ershin eventually learns Level Three spells for every element, including its own personal non-elemental "breath" technique, so it is possible for Ershin to stand toe-to-toe with Nina when it comes to damaging enemies with magic. Its Stand Out skill guarantees enemies will target Ershin as long as it remains in the front row, and with its high defense level, this makes Ershin an effective damage magnet for tanking. With the right skills, equipment and training, it can become a very effective ally for the party.

Ershin's unique skill in battle only occurs when it is in reserve. Occasionally, it will use Covering Fire to fire off a regular rocket punch attack (Mega Man-style), which may or may not be helpful. Effectively, this can help add just an extra bit of damage from time to time, but Ershin may accidentally kill off an enemy the player may be trying to copy a skill or steal an item from.

Unlike the rest of the party, Ershin has no element background to speak of, so it takes no additional damage from any particular element, making it a solid character to withstand against magical attacks. 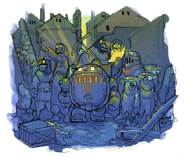 In Chamba
Add a photo to this gallery
Retrieved from "https://capcom.fandom.com/wiki/Ershin?oldid=137892"
Community content is available under CC-BY-SA unless otherwise noted.