Enker is a boss character from the Mega Man Classic games, whose only purpose was to destroy Mega Man. Enker enjoys the thrill of combat, and likes to study an opponent before engaging him in battle. He is equipped with a long spear, the Mirror Buster, that can absorb weapon energy and turn it into a burst of concentrated plasma. Created by Wily in Mega Man: Dr. Wily's Revenge to destroy our hero, Enker later appeared in Mega Man V, Mega Man Soccer and Mega Man 10.

Enker is usually very difficult to fight, as he is immune to all weapons except the Mega Buster. When the player fights him, Enker rises his spear to use the Mirror Buster, absorbing attacks used against him to increase the power, speed and range of his attack. After the attack, he will move to the other side of the room by running, jumping twice, or doing one jump to the center and then a quick run. He then repeats this pattern. In Mega Man 10, Enker attacks with a similar pattern as he did in Dr. Wily's Revenge but now moves faster than his previous appearances. The Mirror Buster has also become stronger with fewer attacks, and he occasionally stops in the center of the room. For the first time ever, Enker has also gained a weakness to a Special/Killer Weapon: the Ballade Cracker.

Enker is notable for being the first model of the three Mega Man Killer robots, robots made with no other objective than to destroy Mega Man.

Along Punk and Ballade, Enker appeared as one of the bosses from the downloadable Special Stages in Mega Man 10.

Enker was also featured as a card in Wily and Light's RockBoard. 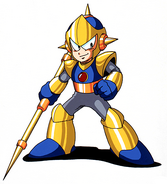