Energy Tanks (Energy Cans in Japan) are recovery items from the classic Mega Man games. Mega Man could stockpile and use these items to heal in an emergency.

The Energy Tank, sometimes shortened to E-Tank, first appeared in Mega Man 2, and since then in almost all games from the original Mega Man series. It fully recovers the health of the user. The maximum number of E-Tanks that could be carried was initially four and increased to nine for Mega Man 3 to Mega Man 6, but reduced back to four for the Game Boy games and Mega Man 7. It returned to nine for Mega Man 9 and 10.

The E-Tank also appears in the Mega Man ZX series, where only one can be carried at a time.

One of the panels in Wily and Right's RockBoard: That's Paradise is a E Tank. In Mega Man Battle & Chase, they are present in the endings of Mega Man, Proto Man and Guts Man. In the latter, Guts Man buys several E-Tanks with the prize money, but he accidentally falls on them. In the game SNK vs. Capcom: Card Fighters DS, the Energy Can ("Can o' Energy" in the English version) is a Counter Card that restores 500 HP.

The E-Tank also featured in Mega Man related media like the Mega Man Megamix manga and the Mega Man animated series. In the latter, they are green Energy Cans given by Eddie. Eddie can store five cans in his head.

The "Mega Man E-Tank" energy drink, known as Rockman E Can sports drink (ロックマンＥ缶飲料, Rockman E Can sports drink?) in Japan, is an energy drink released by Capcom in August 2008 in Japan and in November 2009 in North America. As the name suggests, it's shaped like a E-Tank. For unknown reasons, the visual was modified in North America. In March 2010, a new version with different flavor was released in Japan. 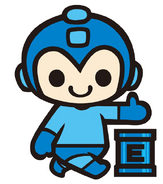 Japanese Sports Drink
Add a photo to this gallery
Retrieved from "https://capcom.fandom.com/wiki/Energy_Tank?oldid=115576"
Community content is available under CC-BY-SA unless otherwise noted.