Eliza is a NPC character in the Street Fighter series of fighting games. She is the wife of Ken Masters, and the sister-in-law of Guile (as he's married to her older sister Julia).

Ken is searching for Ryu for some training, having recently won the first "World Warrior" tournament in the events of the original Street Fighter. In Ken's ending in the original Street Fighter Alpha, he defeats Ryu and heads back to America, where he meets his future girlfriend Eliza. She makes an impression on him, and not just with her nice looks; as soon as she approaches him, she cheerfully asks him "You fight well, but what are you fighting for? Money, fame, the attention?"; Ken replies that he's fighting to defeat "a certain man", and that he won't stop until he does so, and then a pleased Eliza tells him her name.

In Street Fighter II, Ken goes to fight in the Street Fighter tournament and leaves Eliza at home. When she hears that he has reached quite the high position in the tournament, she flies to Thailand to watch him. At some point she goes to greet him, much to his surprise (featured in Ken's ending); they get married soon afterwards.

In Street Fighter IV OVA: The Ties That Bind, Eliza, who has just found out that she's pregnant but hasn't told Ken still, is captured by C. Viper in order to lure Ryu in for Seth. In the end, Ken manages to rescue her in one piece and she tells him that he's going to be a father, but unfortunately, during the escape, she saw Seth's brutal beating of Ryu.

In Street Fighter IV, Eliza appears in in Ken's prologue and ending; she is now heavily pregnant, but when Ken hesitates about joining the new Street Fighter tournament for her safety, she tells him to go anyway because she's still not due, and she knows he needs to check on Ryu's well-being too. Their child is born in Ken's Super Street Fighter IV ending.

Street Fighter III (released in 1997), features Ken, who is now married to Eliza and their child; a boy named Mel who wishes to follow in his father's footsteps of becoming a warrior. 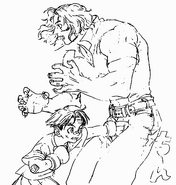 Gif of Eliza punching Ken.
Add a photo to this gallery
Retrieved from "https://capcom.fandom.com/wiki/Eliza?oldid=108981"
Community content is available under CC-BY-SA unless otherwise noted.