Capcom Database
Register
Don't have an account?
Sign In
Advertisement
in: Games, Beat 'em up Games, 1997 video games,
and 2 more

Electronic Popple is a 1997 MS-DOS based beat 'em up game developed by ByteShock Software and published by Capcom USA for Windows 95 operating computers.

In Electronic Popple players control two computer chips, MIN and MAX, inside of a computer environment with various other computer components serving as enemies and NPCs. The game plays like a typical belt-scrolling beat 'em up, with one button to attack and one to jump, continuously mashing the attack button causing the characters to perform combos on the enemies. Defeated enemies drop "popples" which are used to level-up the player characters, as well as health restoratives and power-ups. 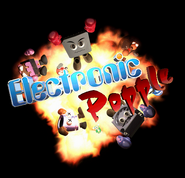