Elec Man (エレキマン Erekiman) is a character from the Mega Man series. He first appeared as one of the Robot Masters from the original Mega Man game.

Elec Man was created by Dr. Light with the original function of managing the electrical output of a nuclear power plant. Because of the importance of Elec Man's job, Dr. Light created him to have sharp judgment as well as very fast speed of movement. It's said he's the greatest among the industrial duty robots built by Dr. Light.

In Dr. Wily's first attempt to take over the world, he abducted and reprogrammed Elec Man, and modified him for battle. Elec Man's primary weapon is the Thunder Beam, a beam-like discharge of electrical energy. Although Elec Man can only produce half the voltage of Spark Man, his Thunder Beam is still an extremely powerful weapon. It's unknown how many robots he's shorted out with it.

Elec Man's strength is his strong feelings toward duty, although he tends to be an uncooperative person. He likes singing along to guitar accompaniment, and dislikes rubber products.

He is a playable character in Mega Man Powered Up.

His NetNavi counterpart in the MegaMan Battle Network series is ElecMan.EXE.

"Elec Man was created to control the flow of power at the nuclear plant. Due to the dangerous nature of his intended work environment, Elec Man was given improved decision-making abilities as well as faster movement speeds. The power generator contained within his body produces high-frequency electricity, which ionizes the high-frequency electromagnetic field surrounding him. By gathering the electricity inside his body at his fingertips, Elec Man is able to release it as a Thunder Beam. Elec Man had always been a dutiful worker, but after being forced into battle against Mega Man, Elec Man realized that he rather enjoyed combat. Will Elec Man be able to find fulfillment in his life after returning to his uneventful days as an industrial robot...?" 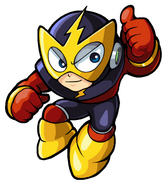 Street Fighter × All Capcom
Add a photo to this gallery
Retrieved from "https://capcom.fandom.com/wiki/Elec_Man?oldid=117579"
Community content is available under CC-BY-SA unless otherwise noted.